Margins strengthened over the second half of April as soaring hog prices more than made up for a significant increase in feed costs since the middle of the month. The hog market continues to be supported by strong demand and historically low pork stocks. USDA reported the national weighted-average base price for negotiated hog carcass value over $102 last week, an increase of about $40 or 65% since the beginning of the year and the highest since October 2014. Pork cutout declined 3.8% last week to $109.54/cwt., led down by a $33.98/cwt. or 17.7% decline in the belly value to $157.47/cwt. High prices may begin to impact retail pork features over the summer grilling season, although the continued reopening and demand from foodservice operations may offset that to some degree. Total pork supplies in Cold Storage at the end of March were 451.7 million pounds, down 26.8% from last year and 24.6% below the five-year average. Pork stocks also
declined 6.5% from the previous month compared to an average drawdown of only 2.5% over the past five years. High prices and an early Easter appeared to encourage a larger than normal drawdown in stocks during the month. The feed markets meanwhile have soared with nearby corn futures trading around $7.50/bushel, rising about $1.50 since the middle of April. A significant decline in crop condition ratings for Brazil’s second corn crop along with abnormally dry weather in the U.S. Corn Belt based on the latest drought monitor from NOAA are raising serious concerns as China appears to be committing to new U.S. corn purchases. Our clients have been making strategic adjustments on existing positions to extend upside coverage on feed costs while also allowing for more upside opportunity on hog revenue hedges. 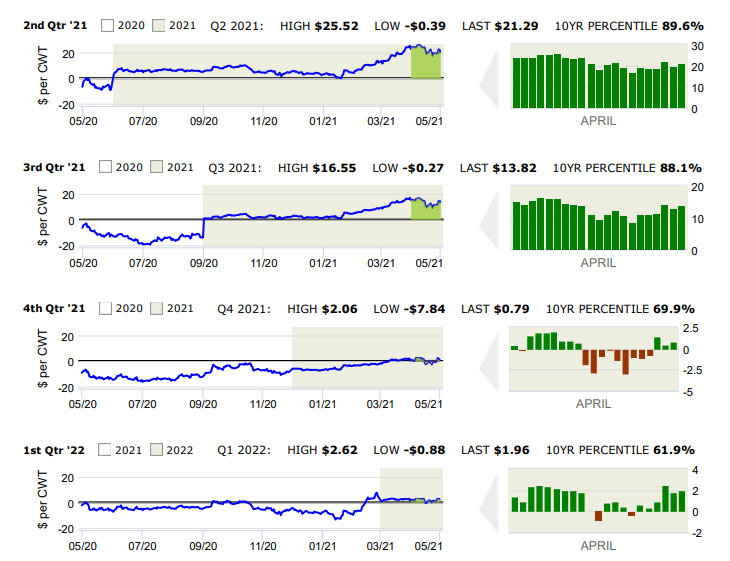