Margins weakened over the first half of April as a selloff in hogs combined with a resumption of higher trade in feed markets to depress forward profitability. The hog market has been quite strong lately, with much of the gain being led by negotiated cash trade with packers aggressively bidding for available supply, although high prices may be starting to impact demand which has really been the driver behind the market’s strength. Last week’s export sales at 17,200 MT were a marketing year low, down 48% from the prior week and 60% below the four-week average. Exports of 38,600 MT however were still quite high and only 2% below the four-week average. According to the National Bureau of Statistics, China’s Q1 pork production rose 31.9% from the previous year to 13.69 million tons, the highest quarterly volume in 2 years. The pig herd increased 29.5% to 415.95 million head, although the average weight of pigs slaughtered declined from a year ago as farmers rushed to liquidate inventory due to a surge in disease outbreaks over the winter. Hog prices have reached the highest level since 2014, with futures up 50% since the beginning of the year and the best-performing commodity market thus far.Domestically, retail pork prices in March were up 8.3% from last year at $416.5 cents per pound which ranks as the fifth highest pork price for any month and the highest since July 2020. The feed markets meanwhile have resumed their uptrend, with concern over cold weather in the Midwest delaying germination this spring. Our clients continue monitoring opportunities to extend margin protection in deferred marketing periods while evaluating strategic adjustments on existing positions. 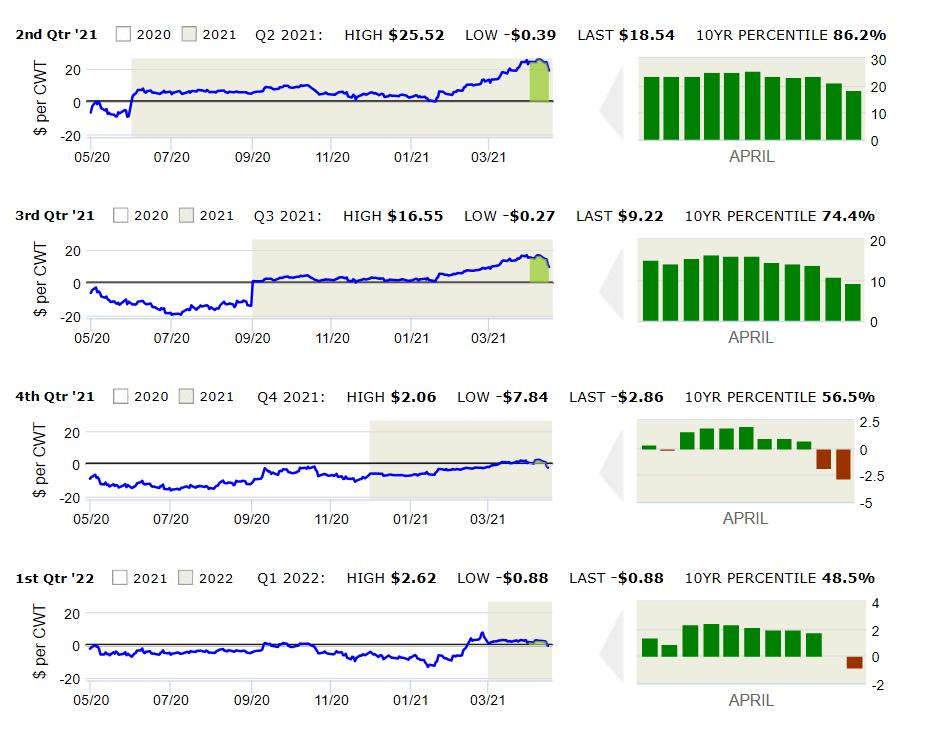 The Hog Margin calculation assumes that 73 lbs of soybean meal and 4.87 bushels of corn are required to produce 100 lean hog lbs.Additional assumed costs include $40 per cwt for other feed and non-feed expenses.