Rao Zihe (center), an academician with the Chinese Academy of Sciences (CAS), Wang Xiangxi (left), a researcher at the Institute of Biophysics of CAS, and Bu Zhigao (right), director of the Harbin Veterinary Research Institute of the Chinese Academy of Agricultural Sciences (CAAS), pose for photos at an Oct. 18 press conference held by the Institute of Biophysics of CAS in Beijing, China. The Chinese scientists have unraveled the three-dimensional structure of the African swine fever virus, laying a foundation for developing effective and safe vaccines against the disease.

The Chinese Academy of Sciences (CAS) has reported that researchers in China have unraveled the three-dimensional structure of the African swine fever (ASF) virus, laying a solid foundation for developing effective and safe vaccines against the disease.

According to the announcement, the research — jointly conducted by scientists at the Institute of Biophysics of CAS and the Harbin Veterinary Research Institute of the Chinese Academy of Agricultural Sciences (CAAS), ShanghaiTech University and other institutes — was published in the latest issue of the academic journal Science.

Bu Zhigao, director of the Harbin Veterinary Research Institute, said China is facing a great challenge in controlling the spread of ASF. It is urgent to develop a more powerful technology tool including a vaccine to prevent the disease, he added.

“The new breakthrough in unveiling the fine structure of the virus is important fundamental research, which will provide clues to explore fundamental mechanisms for infection, pathogenicity and immunology of African swine fever, as well as vaccine development,” Bu said.

The scientists successfully isolated the epidemic strain of the ASF virus that is spreading in China, CAS said. It took the research team four months to collect more than 100 terabytes of high-quality data.

The virus contains more than 30,000 protein subunits, forming a spherical particle with a diameter of about 260 nanometers.

The study also identified structural proteins of the virus, revealing potential protective antigens and key information on the epitope, the part of an antigen molecule to which an antibody attaches itself, CAS reported.

Additionally, the research showed the complex arrangement and interaction mode of the structural proteins and proposed the possible assembly mechanism of the ASF virus, providing an important clue as to how it invades host cells and evades and antagonizes the host antiviral immunity, the announcement said.

Wang Xiangxi, a researcher at the Institute of Biophysics of CAS, said the five-layer structure of the ASF virus is very rare and complicated compared with other viruses.

“The size of the African swine fever virus is huge, which is the largest one among the viruses unraveled by Chinese scientists. Its diameter is 10 times longer than the diameter of the hepatitis A virus,” Wang said. “African swine fever, with an epidemic history of nearly 100 years, is a challenging global problem. It has a stable structure and can survive for months under normal temperatures, posing a great challenge for prevention and control. Scientists have limited knowledge of the virus. We hope to open the door to have a better understanding of the disease.”

Rao Zihe, a CAS academician and one of the leading scientists of the research, added that unveiling the structure of ASF fever is the first important step in the “long march” to tackle the disease, the announcement said. Researchers will continue to analyze the structure of the virus’s core-shell, and how the virus interacts with receptors.

Shao Feng, another CAS academician and deputy director of the National Institute of Biological Sciences, said compared with other viruses, scientists’ knowledge about ASF is almost zero. Cooperation between scientists including immunologists is needed to push forward vaccine research, Shao added.

China has the largest pig-producing quantity in the world, and it is an arduous task to control African swine fever. China has conducted lab research on the vaccine against the disease, but the vaccines under development are still not perfect, according to Bu. 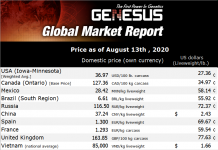