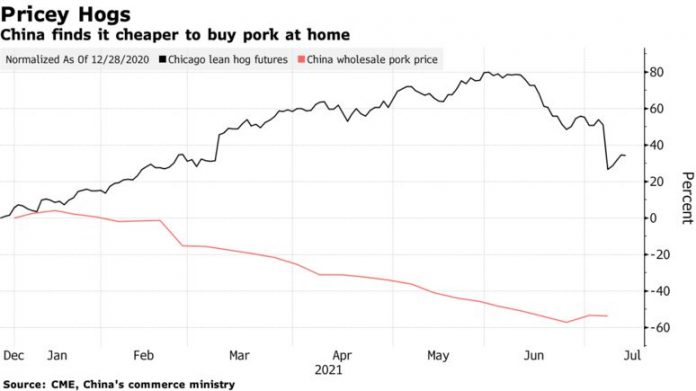 China’s record demand for foreign pork is about to crater after domestic prices plummeted, potentially easing pressure on the world meat market and cooling at least one constituent of global food costs.

The planet’s biggest importer of the protein staple could slash overseas purchases by more than 50% in the July-December period from the first half of the year because local supplies are now cheaper than overseas shipments, said Jim Huang, head of China-America Commodity Data Analytics, an independent consulting firm focused on agriculture.

Benchmark global hog futures have surged more than 25% in Chicago this year on strong demand and higher feed costs. By contrast, pork prices in China have slumped more than 50% on increased supplies as domestic herds rebound from African swine fever. U.S. pork is now more expensive than domestic meat after tariffs and freight, Huang said. This also means that the government can now replenish state reserves more cheaply on the local market.

The plunge in China’s demand for foreign pork could be welcome news for consumers elsewhere in the world. Rising prices of meat, grains and edible oils have helped boost global food costs this year to the highest level since 2011, igniting inflation fears, as the world struggles to emerge from the pandemic.

As an illustration of the increase in local supply, pork production in China jumped 36% in the first half of the year from a year earlier to about 27 million tons, while hog numbers were up almost 30% to 439 million at the end of June from 12 months earlier, according to statistics bureau data Thursday.

For the whole of 2020, China imported a record 4.4 million tons of pork, more than double a year earlier, while in the first five months of this year overseas purchases were already about 14% higher at almost 2 million tons, official customs data show. Spain, Brazil and the U.S. were the top suppliers.

The government no longer needs to import pork for state reserves after the slump in local prices, said Lin Guofa, senior analyst at consultancy Bric Agriculture Group. Beijing has now been buying on the domestic market instead, purchasing 13,000 tons this week and 17,000 tons last week.

Until earlier this year, the government was selling pork from stockpiles to cool the market after African swine fever cut hog numbers by almost half and sent prices soaring. Beijing released 670,000 tons from state reserves in 2020, roughly the equivalent of 15% of the amount of pork imported that year.

While the country’s demand for foreign pork is poised to drop in the second half, it’s a different story for beef. Overseas purchases of the meat are likely to hold little changed compared with the first six months of the year because of domestic shortages and elevated prices, according to Bric’s Lin.