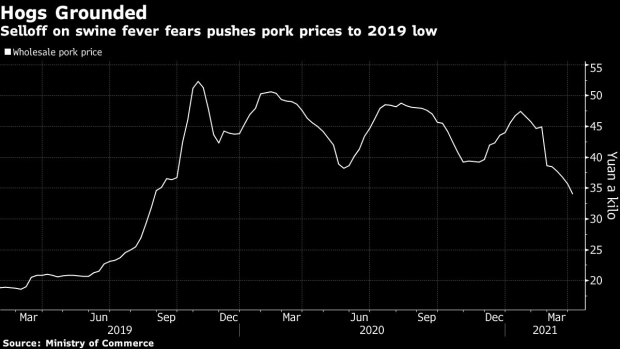 China’s pork prices have slumped to the weakest in 19 months amid panic selling by farmers after fresh outbreaks of African swine fever and bans on the transport of live hogs in some parts of the world’s biggest consumer and producer.

Wholesale pork prices plunged 19% in the first quarter, the most since at least 2006, and touched 34 yuan ($5.20) a kilogram in early April, the lowest since August 2019. The selloff started in mid-January amid new outbreaks of African swine fever in some northern provinces and on bans by the south on live hogs from the north, said Zhu Liang, analyst with Chaos Ternary Futures.

The slide in pork costs may help curb inflationary pressures in the country. The producer price index climbed 4.4% from a year earlier in March, the most since July 2018, according to the National Bureau of Statistics. The consumer price index increased 0.4% after falling for two straight months.

The slump in domestic prices damps the outlook for more overseas purchases because some buyers are selling at a loss, said Lin Guofa, a senior analyst at Bric Agriculture Group. Imported meat stockpiled in cold storage and at ports has been gradually released into the domestic market in recent months as authorities decided to speed up clearance of shipments.

To curb the spread of African swine fever, the agriculture ministry implemented a raft of measures, including a ban on the transport of live hogs to some provinces in the south starting this month. Sichuan and Hainan provinces, the major consuming area, also banned live hogs from other provinces, and Guangxi suspended arrivals from northern regions.

Still, prices may rebound in May because of a shortage of fattened hogs and rising seasonal demand, said Chaos Ternary’s Zhu. Fattened hogs are in short supply because more piglets than usual succumbed to disease in the winter.

Pork prices in most areas in the country rebounded on Monday, with some hog farms raising their prices by 1 yuan a kilo, according to data published by Guangxi Yangxiang Co. Ltd, a major pig farm, on its official WeChat account.

Hog breeding expenses are up 36% from levels before the virus outbreak because of rising costs for corn, labor and waste treatment, Yang Zhenhai, the head of the animal husbandry bureau at the agriculture ministry, told state media. Average costs are about 280 yuan a hog or 17 yuan a kilogram, versus 12.5 yuan before the country reported the virus in 2018, said Yang.