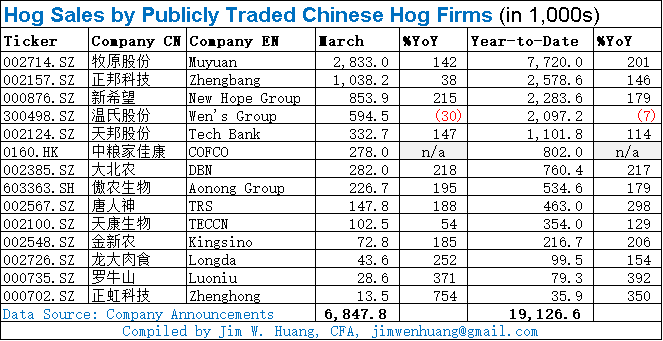 [Greene County IL, Apr 14] China’s cash hog price averages RMB 23.1 per kilogram on Wednesday, down 35% from January 1st and down 31% from a year ago, according to price data monitored by China-America Commodity Data Analytics. (Notes: US$1≈6.5 yuan). Since March 18, cash hog declined 25 days in a row to 21.2, a total drop of nearly 7 yuan or 24%. The cash market stabilized and rebounded in the last three days.

While a large quantity of hogs had already been timed for sales ahead of the CNY holiday, resurface of African Swine Fever (ASF) and winter-related illness induced liquidation of less effective sows. As holiday demand failed to materialize, oversupply of hogs crashed the cash market, triggering more panic sales and spreading to more sows and younger hogs. This put further pressure on hog price.

Yesterday, the Ministry of Agriculture and Rural Affairs released the latest hog slaughter data. For the month of March, 15.1 million hogs were slaughtered in large and medium-sized slaughterhouses monitored by the Ministry, up 5.9% from February, and up 28.8% from a year ago. The following table shows the hog slaughter data trend in the last six months.

Strong slaughter data can be validated by the record hog sales reported from large hog firms. As of today, 14 publicly traded Chinese hog firms have released hog sales data for March and Year-to-Date.

Muyuan firmly locks in its title as the No. 1 Hog Producer in China with a record sales of 2.83 million hogs in March, and 7.72 million in total for the first three months of 2021. Year-to-date sales growth reached an astonishing 201%! If we just multiply the quarterly data by four, Muyuan is well on its path to exceed 30 million hog sales this year. This would be over 70% above its 2020 record sales of 18.1 million hogs. And it will certainly make Muyuan the Top Hog Producer in the World.

Wen’s Group fell to the four place in terms of hog sales. March output of 594.5K was 30% below year-ago data. In 2019, the Company suffered heavy ASF-related sow losses from thousands of contract farmers. It had made conservative production plans for the following years, resulting in the lower numbers we are seeing.

In all, the 14 public hog firms sold 19.13 million hog year-to-date. Our full-year estimate of 80 million hogs puts this group of giant hog farms at 20% market share of total hog output in China. Just a few years ago, their market share was still in single digit, and the lion share of China’s hogs was produced by 70 million small family farms.

Recently, several news stories focused on high piglet price and loss of sow stock based on private surveys. Some came to the conclusion of large hog shortage, even bigger than in 2019.

I beg to differ. Independent data providers tend to have limited access to large hog firms and base their samples largely on small farms. Recent surveys mainly tracked farmers in small villages. These analyses failed to take into account the exponential growth of giant hog firms, which more than offset the exiting of small farms, whether due to ASF or by bankruptcy with hog price in down trend.

In the StoneX-CACDA joint Webinar on “China’s impact on US Pork Markets” last Wednesday, I illustrated how different the businesses of giant hog farms and small hog farms are in China. As small feeder pig finishing operations are approaching breakeven point at current price level, giant farms with farrow-to-finish operations still enjoy record sales, record revenue and record profit. They continue to expand at lightning speed, and view low price as a good opportunity to weed out competition.

If you have not attended the webinar and would like to receive a copy of my presentation, please send me an email at jimwenhuang@gmail.com. 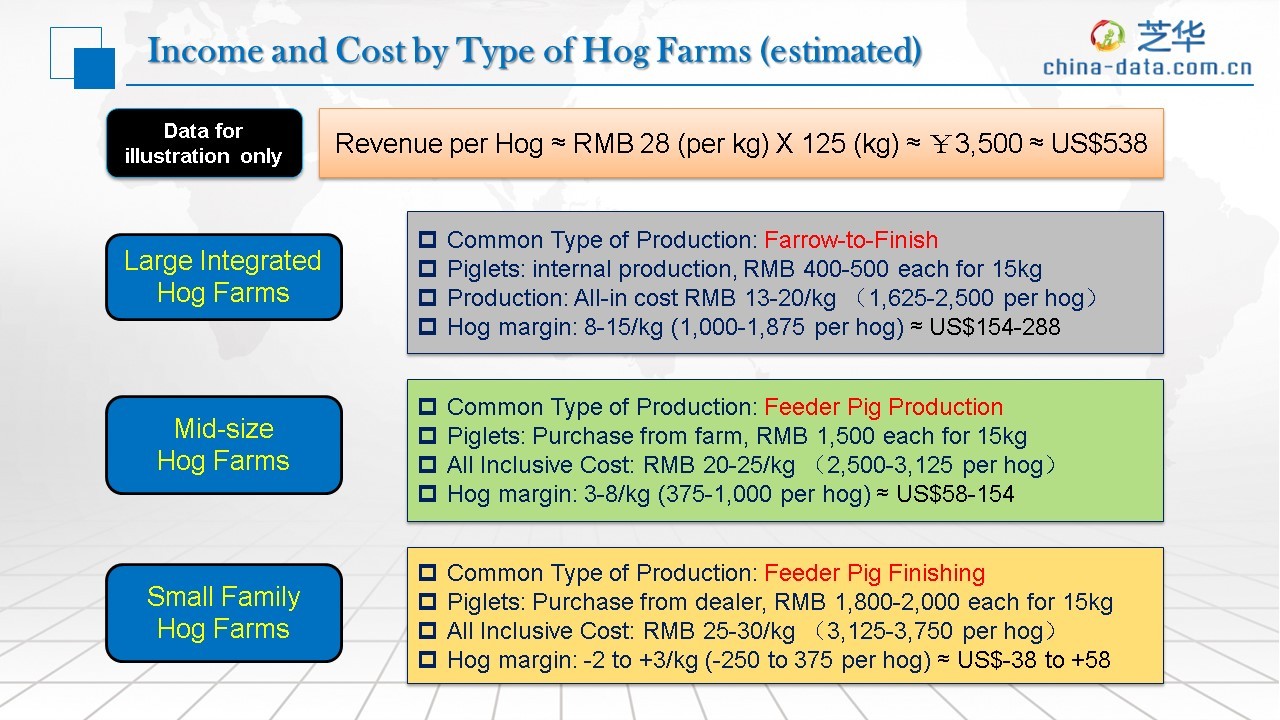 Where will China Hog Market Go from Here?

With May Data holiday (May 1, International Labor Day) coming up, cash hog market stabilizes this week. Chinese government is not likely to implement travel and social-distancing restrictions similar to those during Chinese New Year in February. Therefore, we could expect a sizeable pickup in meat demand from more travels, more gatherings and restaurant dining. There will be a short-term hog shortage due to liquidation of sows and younger pigs in the past few months, which provide good price support in the second half of the year.

However, the long-term supply/demand driver is Hog Cycle. In my opinion, it is quite apparent that China has entered the four and final phase of the Hog Price Cycle started in 2018. Hog supply will recover slowly but surely, primarily from the large farm sector. Hog price will drop and rebound repeatedly, until new equilibrium is reached with enough small farms exiting the market.

In the next hog market commentary, I will take a deep dive into China’s hog price cycle, and illustrate how ASF and COVID created twists and turns, and prolong the current cycle.

If you would like to receive China Hog Market Weekly Commentary directly, please send an email request to the author with your email address.