The Hog Industry Index (shown as a white line in the chart below) underperformed the CSI 300 stock  market index (brown line) by 8%, and at one point it was 30% below the Wind Commodity Index  (CCFI.WI, yellow line), which tracks all major commodity prices in China. Based on market data tracked by CACDA, China’s national average live hog price is RMB 17.40 per kilogram on Sunday (equivalent to $1.24 per pound, US$1≈6.37 yuan). After hog price fell below the psychologically important 20-yuan mark three weeks ago, this new low shatters all hopes that a bull market would resume any time soon.

Current cash hog price represents a whopping 19 yuan drop (-52%) from the January 8th high of 36.61,  and wipes out the profitability for a majority of China’s hog industry. 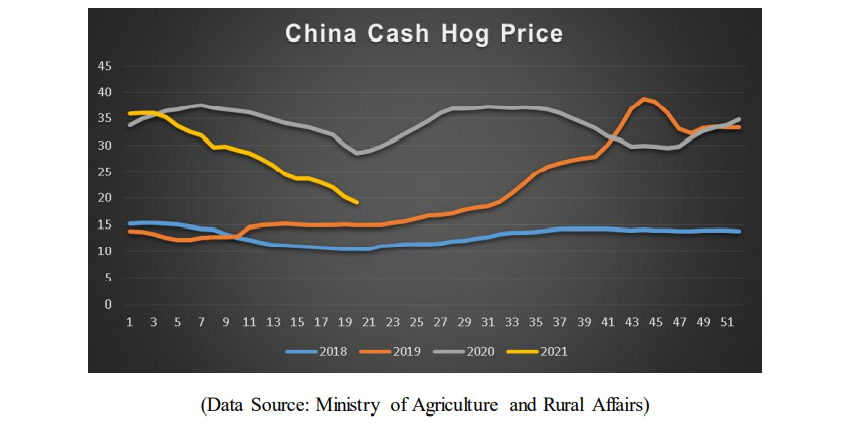 Based on calculation by China’s Ministry of Agriculture and Rural Affairs, hog production cost for Farrow-to-Finish operation averaged 16.5/kg in April. CACDA estimates that public hog firms could still earn a small profit of 200 yuan per hog, with the rest of the industry operating at or below breakeven point. This is a sharp contrast with the 2500 yuan (≈$400) hog profit merely five months ago.
Besides low hog price, rising costs in feeds, labor and pandemic prevention expense also contributed to the significant decline in hog profit margin.

The Ministry of Agriculture recently published April hog and sow stock data: total hog stock in China  was 416 million, which total sow stock was 43.7 million. The latest hog stock is 28% above the year  ago level, and just 7.7% below the April 2018 level prior to the outbreak of African Swine Fever (ASF).  April sow stock is up 26% year-over-year, and still 17.1% shy of the level three years ago.

Separately, China Statistics Bureau and about two dozen provincial statistics bureaus released hog  stock data as of the end of first quarter. The Top-10 provinces have a total of 271 million hogs and  account for 65.2% of all the hog population in China. These provinces saw a huge 44.7% growth year  over year. The remaining provinces have 145 million hogs, up 36.9% from a year ago. 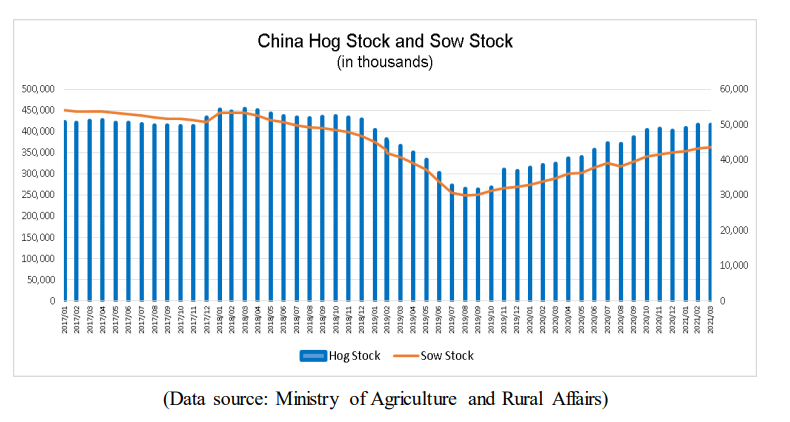 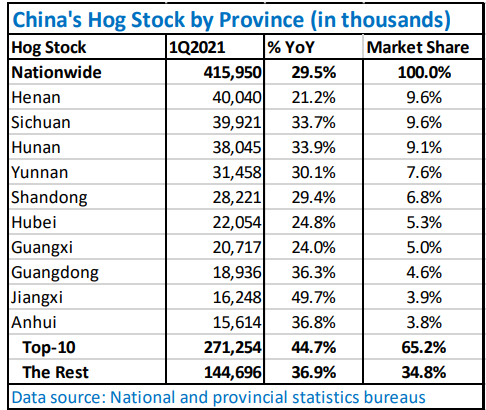 Hog sales data released by public firms supports the assessment of strong hog stock recovery. In the first four months of 2021, China’s Top-10 hog firms together sold 24.96 million hogs, up 119% from the same period last year. Most big hog firms saw their hog sales double or even triple. Muyuan, the No. 1 hog firm in China, realized sales of 10.9 million hogs through April. It did not reach the 10 million mark until August last year.

Another supporting data is cash market piglet price: It declined 22 yuan (-23%) to 72 yuan per kilogram since March. This is the strongest evidence of ample hog supply. While ASF is nowhere near eradication, it is no longer a widespread threat to China’s hog industry, in my opinion. 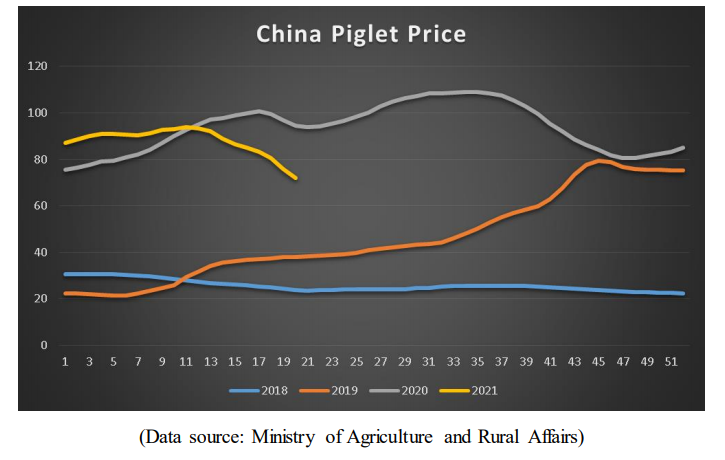 Hog market leader Muyuan is the only large hog firm with increased profit. It reported Q1 net profit of RMB 6.9 billion, the best quarter ever in the company’s history. Muyuan estimated its hog production cost to be 11.48 yuan per kg in 2021, the lowest in the industry. It still earns over 700 yuan per hog at today’s low hog price.

However, Muyuan’s stock has lost 24% in the past 60 days. Investors grew worried of its future profitability with the unexpected hog price fall. During the bull market in 2019-2020, Muyuan benefited from its All-In approach in capacity expansion. Its hog plants under construction was valued at RMB 14.8 billion on its FY 2020 balance sheet, up 72.5% from a year ago. With hog price under prolong pressure, and Muyuan’s hog output continue to double every year in the next 2-3 years, market appears to lose faith in the company’s ability to strive in the downturn hog cycle. 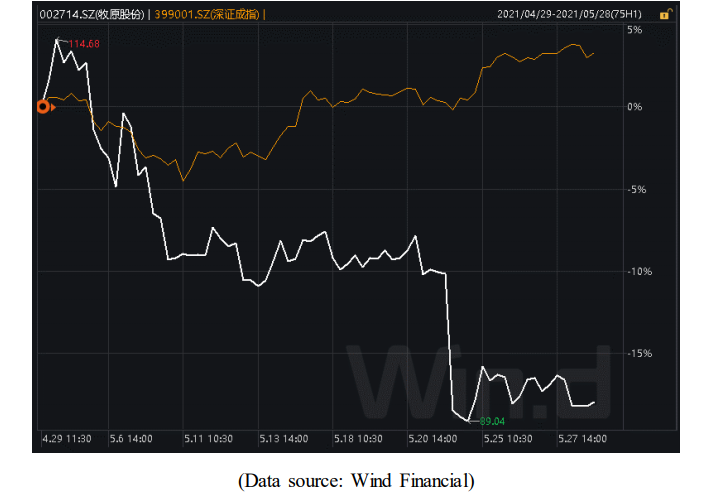 Upcoming: World Hog Expo and CACDA/StoneX China Hog Update I will be attending the World Pork Expo in Des Moines, Iowa on June 8-11 and really look forward to meeting everyone there. If you would like to schedule a meet-up, please feel free to send me an email
at jimwenhuang@gmail.com.

In early July, I will be joined by Gavin McPherson of StoneX Group for a second webinar on China
Hog Market update. Formal announcement will be made in about two weeks.