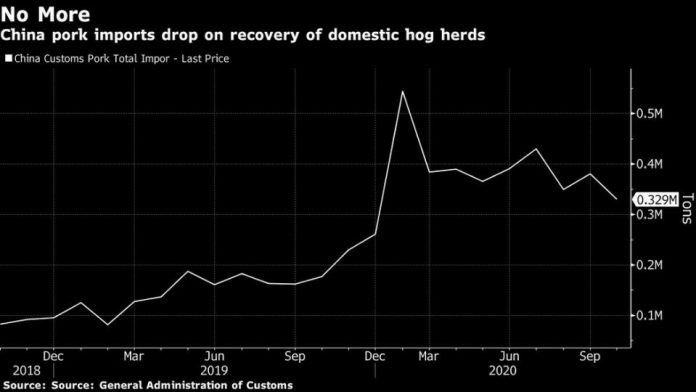 Pork imports by the world’s top consumer may fall as much as 30% next year as the recovery of China’s hog herd from African swine fever exceeds expectations, Pan Chenjun, a senior livestock analyst with Rabobank, said on Tuesday.

Overseas purchases of pork and offal could drop to 3.5 million tons in 2021, said Pan, from a record of more than 5 million tons this year that saw China account for almost half the global trade in the meat. It would still leave the nation as the world’s biggest importer. Pan’s estimate is close to a commerce ministry forecast that imports will fall to 3 million tons in 2021.

The decline will pose challenges to overseas suppliers, who will be forced to seek alternative markets, Pan told an online media briefing in Beijing. Europe is China’s top provider, followed by the U.S. and Brazil.

China’s pork purchases in October fell to the lowest since February after strict testing and disinfection procedures for Covid-19 slowed imports. The protocols were put in place to assuage food safety concerns among the public following reports of contaminated frozen food shipments.

Pan also expects a drop in poultry imports. But she said beef imports are likely to remain strong due to limited growth in domestic output, coupled with rising consumption, particularly in homes via online purchases.

And imports of the red meat could rise by more than 20% next year if China allows the use of the growth additive ractopamine, which is prevalent in U.S. livestock including cattle, she said. China is still assessing the feed ingredient, according to the U.S. Department of Agriculture.

If farmers can control African swine fever over the winter, China’s own production may increase at least 10% from this year’s levels, with a full recovery in pig numbers due in 2023 or 2024, said Pan. Record breeding profits have triggered an aggressive expansion in farms large and small this year, although domestic pork prices may remain elevated in 2021, she said.