Pork is a huge deal in China. The country is home to half of all the pigs on the planet. The meat is a staple of the Chinese diet, which means its scarcity could damage China’s social stability. The outbreak of swine fever also threatens to upend the global pork supply chain.
While Chinese authorities have already made plans to shore up the pig market — including subsidies for pig farms and families who may struggle with soaring prices — they’re stepping up efforts to deal with the crisis. 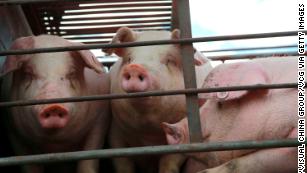 China has a new plan to solve its pork problem
The price retailers pay for pork has spiked nearly 70% in the last year. And the average price that wholesalers pay suppliers was up 90% in the last week of August compared to a year ago, according to government data. Analysts say prices could yet go even higher.
The government on Wednesday announced more measures to encourage pig farmers and producers to breed more hogs. But they may need to go even further to plug the supply gap.
Authorities have pledged to release the government’s emergency reserves of frozen pig meat if necessary. Ministry of Commerce spokesman Gao Feng said last week that the agency will “closely monitor market developments” before it makes such a decision.
It’s difficult to overstate the scale of the problem. As of July, China had lost more than 100 million pigs in the last year, according data released Tuesday by the country’s agricultural ministry.

Part of the problem is that farmers aren’t restocking their live pigs after the sick animals die, according to China’s agricultural ministry.
That has prompted Chinese authorities to explore ways to encourage farmers and producers to breed more hogs. The finance and agricultural ministries on Wednesday asked local governments to free up money that could be used for artificial insemination technology. 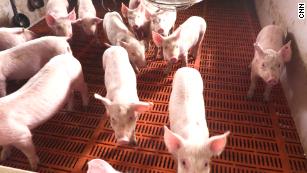 Beijing admits ‘weaknesses’ in handling of African swine fever crisis
The ministries also called on local officials to expedite the distribution of subsidies to farms where pigs have been culled because of sickness. And the Beijing government plans to increase subsidies, loan support and insurance coverage for pig producers nationwide.
The new efforts to tackle the crisis spurred optimism among pork investors Wednesday. WH Group (WHGLY), the world’s largest pork processor, saw its stock surge 7.9% in Hong Kong. Shares in China Yurun Food Group and COFCO Meat Holdings climbed 3.2% and 3%, respectively.
China has already introduced rationing that limits citizens to buying certain quantities of pork in some cities. And some local governments are offering discounts on pork to offset the soaring prices.
In the southern city of Nanning, for example, pork was discounted this month by at least 10% off the average market price, according to a local government-run newspaper. Citizens there are limited to buying 1 kilogram of pork per day.
Several cities in the southern province of Fujian, meanwhile, have also offered subsidies, according to the local governments. Those places are also limiting the amount that can be purchased.

Analysts predict that the price of pork could continue to soar in the coming months. It could peak at 30 yuan ($4.20) per kilogram (2.2 pounds), analysts at the investment firm Soochow Securities wrote in a report last month. That’s more than 40% above where it is now.
Higher prices would likely put pressure on China to import more pork from the rest of the world. Rabobank estimates that China’s pork production could fall by 25% this year, which means the country would need to import as much as 1.5 million metric tons of pig carcasses.
That could benefit pork exporters elsewhere around the globe. Rabobank analyst Matteo Lagatti says that he expects Europe to account for the lion’s share of those imports.
Chinese pork imports from Europe have already increased 54% in the first half of 2019. Most of that is coming from Spain, Germany, Denmark, the Netherlands and France.
“The trend is bound to continue in 2020,” Lagatti wrote in a research note this week.
Source: CNN