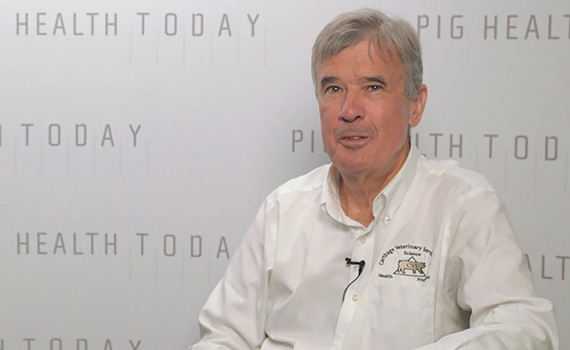 African swine fever (AFS) has not been diagnosed in the US, but many industry experts feel its arrival is inevitable. The disease has continued its steady, insidious spread in other parts of the world, but the fact that the US has remained free of the virus to-date has given veterinarians a window of opportunity. They have time to study the virus and determine elimination and control strategies, said Joe Connor, DVM, in an interview with Pig Health Today. Connor, who serves as a consultant within Carthage Veterinary Services, is a pioneer in pig production and has been involved in innovation projects for decades. He had a first-hand look at how China was managing ASF.

“The wild ASF virus creates high mortality and relatively repeatable clinical signs , but there are things we can do if it’s identified and confirmed early on,” he said. “By removing infected pigs and removing ‘pigs in contact,’ and by putting up solid barriers between pigs or groups of pigs, we’ve actually been able to salvage the rest of the population in those barns.”

It’s also important to manage carcass handling and removal also, Connor said, but if sound protocols are followed (including testing of close-in-contact animals), it is possible to maintain the rest of the animals in some herds as free, with restricted partial depopulation.

Veterinarians have a tendency to group viruses together in terms of transmission, but Connor said it’s important to think about ASF should be looked at as an individual virus with its unique characteristics.

“This virus does not readily transmit by aerosol and as such, almost all transmission is direct contact or direct contamination through transport, so you can start thinking about how to remove an individual animal or group of animals, or how to put up solid barriers that would prevent direct animal contact,” he explained. “When that is coupled with pig-site diagnostics — PCR [polymerase chain reaction] tests that can be utilized for individual samples and to make decisions on animal removal — then you can be successful.”

Early recognition of a sow or a pig that would become infected with ASF is also critical and steps must be taken immediately, he said. On-site PCR testing allows for quick results that would determine whether an animal is positive or negative, so steps to remove that pig or the in-contact pigs can be done quickly. Unfortunately,  the widespread  use of non-differential modified live virus ASF vaccines in herds has modified and shifted the clinical expression in some herds to where the early identification and removal is much less effective. It also has complicated the diagnostics since the PCRs may not have the correct primers for identification.

Production companies in China have had ongoing education programs for caregivers, Connor said. Typically,  veterinarians and production staff are very aggressive in assessing pigs that are off feed and recumbent (slow to rise). These pigs are sampled with a pig-site PCR test, and the next steps of control and removal are followed, depending on their positive or negative status.

What about secondary infections?

The Asian countries tend to be endemic for a number of key viruses and bacteria that contribute to mortality, Connor said.

“Many of those herds would have circulating Pseudorabies or Aujeszky’s disease, porcine respiratory and reproductive syndrome,  Classical swine fever and Actinobacillus pleuropneumoniae,” Connor said. “These co­infections not only increase mortality and morbidity, they also complicate the clinical and laboratory diagnostics.”

Fortunately, many of the diseases in Asia aren’t present in the US, but others, like PRRS and influenza, are common.

The presence of those diseases “further emphasizes why our diagnostic laboratories have to be active and ready, and we need to continue to push forward for pig-site tests,” Connor stressed. “And, as we’re doing with a number of research studies, we need different methods to collect and process those samples so we can get accurate, rapid results.”

Vaccines in other countries

When asked about the potential use of an ASF vaccine in the US, Connor said there is no specific timeline, and vaccines being used in other countries would have to go through the necessary approval processes to be used here.  A vaccine muse be safe, efficacious, and differential.

The Asian countries immediately used modified, live vaccines, which were not differential vaccines, nor were they always determined to be safe, Connor noted. “The result is that now there are multiple strains of ASF circulating in some of those populations.

“An important part of the containment is having a pig-site PCR,” he added. “That becomes problematic if the primers in the PCR do not detect that particular strain of virus. We want to avoid that in the US. That’s one reason why we regulate vaccines — to make sure they are safe before they’re applied.”

In addition, for vaccine usage to be accepted, it would take a change in regulations, Connor said. The World Organization for Animal Health would have to determine how exports would be handled in terms of product movement between countries.

“Having said that, there is recent data indicating we have the ability to potentially manufacture a gene-deleted vaccine that is safe,.. .does not revert to any wild-type virus and can easily have a differential test,” he said. “Then, you could think about. . .zone use of vaccine that would allow immunization to protect animals, differentiate infected animals from noninfected animals, and couple that with potentially a test and removal, like we did in the eradication of pseudorabies.”

Even if the US is fortunate enough to never have the ASF virus, producers still have transmission of diseases due to biosecurity weaknesses. This means the industry needs to improve if a foreign animal disease did become a problem.

“We also need to put more emphasis on transportation and movement of cull sows,” he added. “Studies have shown cull sow movement can create a risk to our industry because sows may be housed in a particular facility for multiple days, or they may move from one market to the other before they’re finally harvested.

“We have great technology today on bio-containment and bio-exclusion, but is it being executed at that particular site or farm? As an industry we’ve made tremendous progress we want to extend that progress and keep the focus on each of those steps for the industry to be successful,” he said.

“We should continue to develop accepted ASF-sampling methods and pig-site diagnostics that are readily available and accurate for determining the positive or negative status of ASF,”

Connor pointed out. “The coming together of vaccine technology and differential technology with good pig management and removal practices allows us the opportunity to think forward,” Connor said. “It would allow us to control this virus in a much more economical manner.”