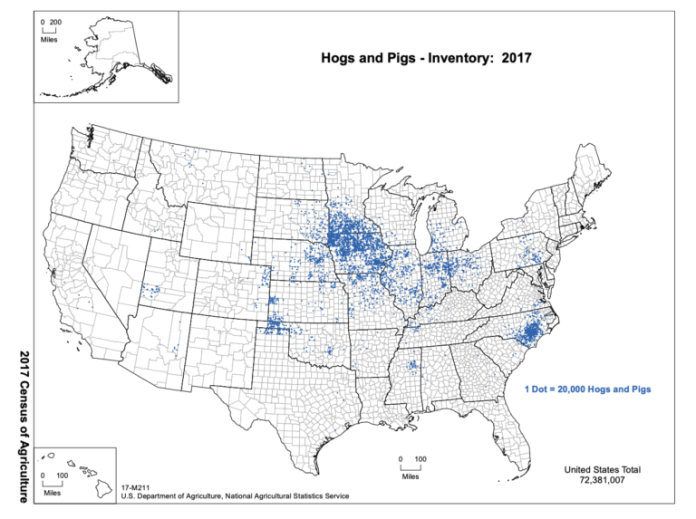 Reuters writer Tom Polansek reported last week that, “Seaboard Foods, the nation’s second-biggest pig producer, said on Friday it will limit sales of certain pork products in California due to a measure requiring farmers to provide more space for animals raised for food sold in the state.

“The company, which produces about 7.2 million hogs a year, ‘will no longer sell certain whole pork products into California due to California’s Proposition 12,’ spokesman David Eaheart said.

“The measure, approved by voters in November 2018, is slated to take effect Jan. 1.”

The Reuters article explained that, “Supporters [of the measure] say it will make food production more humane by setting minimum space requirements for calves raised for veal, breeding pigs and egg-laying hens. It also forbids the sale of raw veal, pork or eggs from animals enclosed in too little space.

“Opponents in the U.S. meat industry argue that enforcement will hurt producers and consumers by increasing food costs, and violate the U.S. Constitution’s Commerce Clause by requiring out-of-state producers to comply or face the sales ban.”

Also last week, Bloomberg writer Michael Hirtzer reported that, “Hog producers and pork producers have largely opposed the rule, arguing that costly renovations to farms will raise meat prices, at a time when they were already soaring and contributing to the highest food inflation in years.”

Meanwhile, Associated Press writer Scott McFetridge reported earlier this month that, “A coalition of California restaurants and grocery stores has filed a lawsuit to block implementation of a new farm animal welfare law, adding to uncertainty about whether bacon and other fresh pork products will be much more expensive or in short supply in the state when the new rules take effect on New Year’s Day.

“The lawsuit is the latest step in a tumultuous three-year process of enacting rules overwhelmingly approved by voters but that remain in question even as the law is set to begin. Since voters approved Proposition 12 by a 2-to-1 ratio in November 2018, state officials have missed deadlines for releasing specific regulations covering the humane treatment of animals that provide meat for the California market.

Most hog producers haven’t made changes to comply with the law. And now a coalition of business owners is seeking more than a two-year delay.

The AP article pointed out that, “If the law takes effect Jan. 1, it’s possible the state could avoid immediate shortages or steep price increases because the industry has about 466 million pounds (211 million kilograms) of pork in storage. Not all of that meat can be sent to California, of course, but when combined with new supplies from processors that meet the new standards, it should meet at least some of the demand.”

Also this month, New York Times writer Christine Chung reported that, “In Iowa, the country’s largest pork-producing state with more than 5,400 pig farms, sales topped more than $40 billion in 2019, according to the Iowa Pork Producers Association. California is the nation’s largest consumer of pork, responsible for 14 percent of all the pork consumed in the United States, according to a February 2021 report by the global financial services company Rabobank. A majority of the pork comes from out-of-state pig farms.”

Illinois is a leading pork producing State, and ranks fourth in pork production in the U.S. behind Iowa, North Carolina, and Minnesota.