There is a growing body of evidence that is  linking  the  interactions  between  diet, intestinal  microbiota,  and  the  pig’s immune  system.  These  interactions  have broad  implications  on  pig  health.  Prebiotics  are dietary compounds that can promote the growth of pig health friendly microbes in preference to disease causing  microbes.  Dietary  prebiotics,  such  as resistant (potato) starches are minimally digested by the  host  and  commensal  microbes  in  the  small intestine. Because of this they can make their way downstream  to  the  large  intestine  where  they  are available   to   the   microbes   as   accessible carbohydrates.

When  these  fermentable  carbohydrates  become depleted the large intestine bacteria often shift from utilizing  diet-derived  carbohydrates  to  harvesting host-derived sugars from the pig’s intestinal mucus layer. If the rate of utilization outpaces the rate of replenishment,  the  pig’s  immune  system “barrier function” can  be  compromised.  When  dietary carbohydrates  are  available  microbes  will  also ferment   the   carbohydrates   into   beneficial metabolites such as short-chain fatty acids (SCFAs). These SCFAs such as butyrate are consumed by the pigs intestinal cells as a source of fuel which then allows for increased secretion of protective mucus, pathogen   killing   antimicrobial   peptides   and immunoglobulin  A. In  this  study,  the  researchers fed the pigs either a diet amended with 5% resistant potato  starch  (RPS)  or  an  unamended  control  diet (CON). 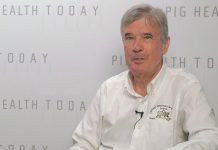