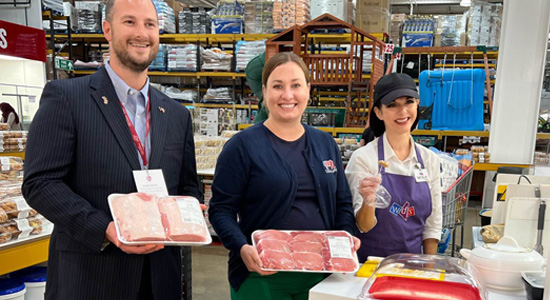 Here’s what they accomplished: The goal of this type of in-market presence is to educate importers on U.S. pork’s sustainability commitment. It’s also a chance to collect feedback that helps NPB’s strategic partners, like U.S. Meat Export Federation, differentiate U.S. pork in a diverse global protein market.

International market development is a key investment for the pork industry. In 2021, more than $62 for every hog sold came from exports.

“We’ve been able to get value out of parts of pigs we don’t eat in the U.S.,” says Knupp. “Our job is to sell each part of the pig every day at the highest value, whether that customer is domestic or international.” → Bonemeal value has been above $20 per hundred pounds since early June, which is well above levels seen at the start of the year which were around $10

→ Blood meal jumped to $107.50 two weeks ago, which was the highest for the year so far

Heat stress will become a more substantial issue for swine production as global temperatures continue to rise and is a limiting factor to efficient and sustainable swine production that must be addressed. This is especially true for heat stress sensitive populations such as gestating and lactating sows.

When: Wednesday, July 27 at 1 p.m. CDT
(registration not required)

*External links to content developed by third parties do not necessarily represent the views of the National Pork Board.
​​​​​