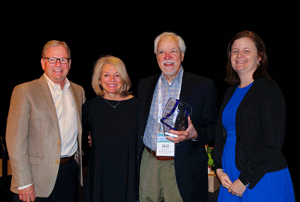 The American Feed Industry Association honored Bill Barr, the president of Bill Barr & Company, with its 2019 Distinguished Service Award for his life-long contributions to the feed industry. Sarah Novak, AFIA’s vice president of membership and public relations, presented the award to Barr at AFIA’s Purchasing and Ingredient Suppliers Conference today in Orlando, Fla.

“Bill has embraced every project with enthusiasm and a can-do attitude,” said Novak. “If he did not have the resources to make something happen, he knew who needed to be included in the conversation to accomplish the goal. He is more than deserving of this award.”

Barr has been a dedicated member of AFIA since 1977. He holds a commitment to quality and exceptional customer service within his own business practices, which he has emulated over his long career in the industry.

Barr’s father formed the company in 1956 as a sales representative agency for manufacturers of ingredients used in the production of animal feed and companion animal food and treats. In the 1950s, progressive nutritionists searched for ingredients that could best balance the nutritional components of the commodity ingredients in use.

As the industry grew and these feeds and foods became more sophisticated, the level of nutrition improved, and Bill Barr & Company expanded its service to customers to include the distribution of critical ingredients and their representation.

During Barr’s AFIA Board chairmanship (2011-12), the association created its Sustainability Oversight Committee, finalized the Pet Food Certification program and strengthened the foundation for AFIA’s public charity, the Institute for Feed Education and Research. Barr served as a pioneer trustee for IFEEDER and remained on the Board until 2015.

“We’ve transformed AFIA into a member-driven organization. We take the ideas and needs of our members as a group and push them forward and that’s great,” Barr said upon receiving the award. “It really starts with saying ‘yes’ to being on a committee and getting involved. It’s been amazing to see what we can do as a group that starts with individuals.”

Barr has been involved with many other trade associations and has received other honors throughout his career, such as Kansas State University College of Agriculture’s Distinguished Alumni of the Year in 2014 and Big Brothers Big Sisters of Kansas City’s Man of the Year in 2013.

He earned a bachelor’s degree in feed technology with an emphasis on animal nutrition and a minor in chemistry from Kansas State University and has completed business management and financial management courses with the Wharton School of Business.