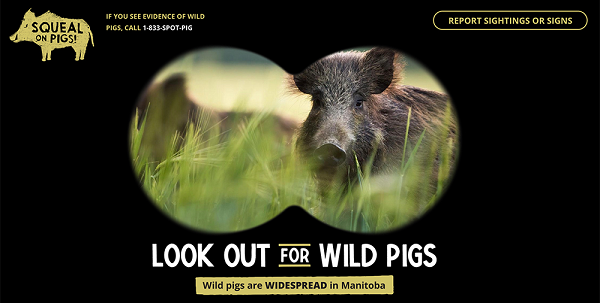 Clip-Dr. Wayne Lees-Manitoba Invasive Swine Eradication Project:
The first step is usually to interview the people involved and gather more information. If it looks like there are pigs in the area, we can set up a trail camera to try to capture sightings of the pigs to determine where they are actually moving.
Then, from then on if those things are positive, we will establish a baiting and trapping corral system in that area so that we can actually capture the pigs. Sometimes numbers of pigs will visit a corral in succession. We always try to capture the whole group at once if we can.
We generally discourage hunting. The reason for that is that it’s been shown that hunting wild pigs actually disperses them and makes them harder to track. It might be a little bit counterintuitive but hunting them has been shown in other areas to be much less effective.
We’re learning those lessons and trying to avoid making pigs either harder to trap or dispersing the area in which they roam.

Dr. Lees says people may see the pigs directly but a very noticeable sign is in pastures where their rooting behavior looks like a rototiller has gone through.