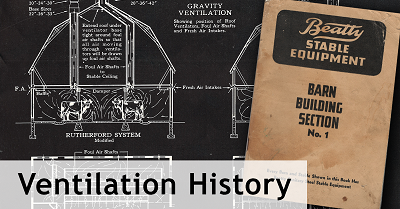 The catalog, published in 1949 by Beatty Stable Equipment, highlights the how and whys around the importance of barn ventilation and getting your animals that sweet fresh air.

In the first few pages, Beatty outlines “The Essentials of a Satisfactory Barn” from the economy of construction to keeping barns warm as Beatty was based in Canada, barn dryness, sunshine, and finally, ventilation.

The section titled “Fresh Air” talks about how often production is “pushed to the limit”, continued with the animals, can only be profitable when kept “healthy and vigorous.” Some consequences of inadequate ventilation are stated as: “slow animal development, poor production, and more disease.”

Beatty state: “A good ventilation system will air-condition the stable. It will control temperatures and prevent unnecessary heat loss. It will control humidity and prevent ceiling rot. It will eliminate stable odors and promote health and comfort. Ventilation will greatly help to raise the animals’ vitality to the highest point, so necessary in achieving greater production”.

I think we can agree there are some great points and realizations from the mid-century building manual.

Beatty continues: “Ventilation cannot be left to chance, opening drafty doors and windows. It should be regulated with fresh air inlets, well located in the outer walls of the stable. A steady inflow of fresh air should be offset by a steady outflow of fresh air, so the animals will receive sufficient quantities of oxygen… Fresh air is free. It pays to take advantage of it.”

It makes you wonder what these farmers 70 years ago would think about the barn ventilation systems we have today? Fully automated and AI-controlled to keep conditions at there best. Not only that, but the farmer can check the temperature and humidity from his lazy-boy while scrolling through Netflix.

Later in the catalog, Beatty gets into further details on types of ventilation solutions. “Two systems of ventilations are commonly used in North America. One is gravity system, and the other a system of forced air circulation by the use of motor-driven exhaust fans for expelling foul air from the stable.”

First mentioned is the “Rutherford System.” This principle is described to work like a stove. “A damper is opened at the bottom of the stove, allowing cool air to pass into the stove where it is heated. It becomes lighter than cool air, rises, and passes out the chimney.” The barn would be constructed to let air in near the floor, and there were outlets in the ceiling where the warm and moist air could exit the stable.

The second gravity-based system is called the “King System.” “Removal of Foul Air from Floor.” The idea is stale air, charged with carbon dioxide, is heavier, and will settle to the floor and be the first removed. “A difficulty with this method is to move moist, damp air from the ceiling, where, under certain conditions, it collects, causing wet and drip. An advantage of this method is that it conserves warmth created by animals and higher stable temperatures results.” The four air shaft was controlled by a counter-weighted sliding door. There is also mention of this system working with satisfactory results in Montreal.

Check out these drawings of both the Rutherford System and the King System. 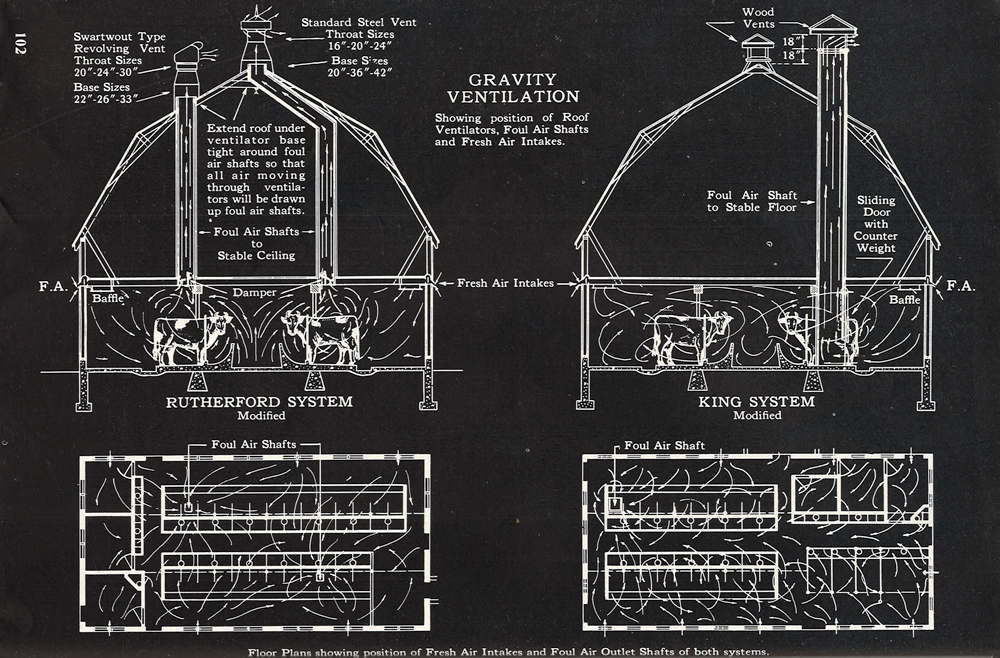 This last section starts with “Where electric power is available..” so there is some context for you. “Fans driven directly by electric motors may be used for exhausting the foul air from stables. The fan draws the foul, moisture-laden air out of the stable. This creates air circulation inside, and a constant flow of fresh, pure air into the stable.”

Beatty mentions: “When the fan starts, the shutters automatically open by the force of the air leaving the fan. For convenience, the fans are usually placed as close to the stable ceiling as possible.”

The Argument for Fans

“Fans eliminate costly four air shafts.” Both gravity ventilation methods mentioned, require foul air shafts built, that need to be precisely built into the barn structure. Beatty proceeds with a strong argument for the use and implementation of electric fans for ventilation.

Foul air shafts tend to cause problems with building and implementation, such as: “interference with drive floors, granaries, and feed chutes. Also difficulty in bracing the amount of valuable space taken up.”

On top of this, preventing condensation and the resulting issues is nearly impossible. Because the foul air vents are removing humid air, humidity in winter  can cause the wood to swell, and in summer, the same woods then begins to rot and shrink. Resulting in leaks and the deterioration of the effectiveness of the entire system. Beatty argues the removal of the foul air shaft can go a long way towards paying for motors and fans. 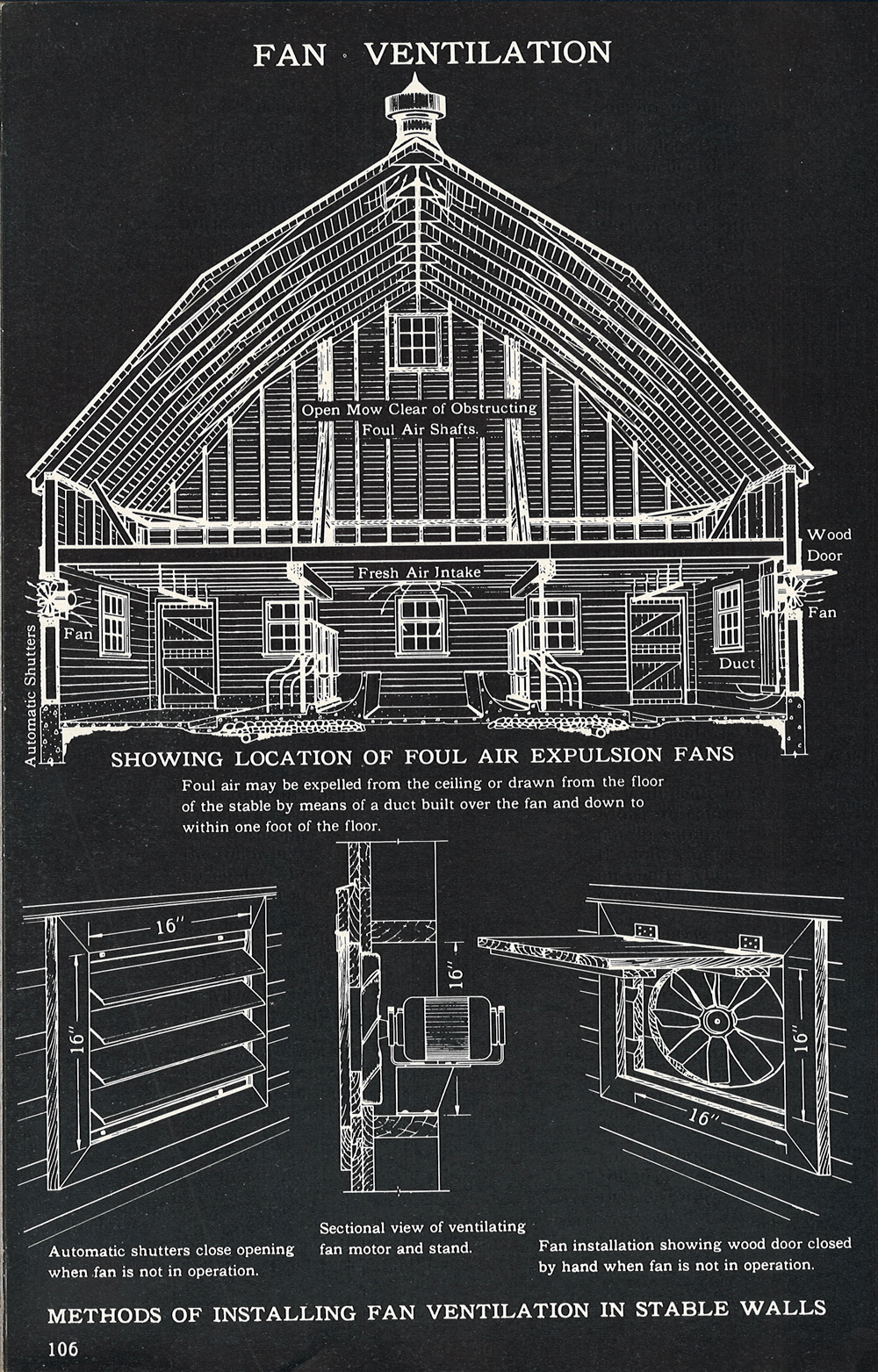 Beatty ensures all the above “worries” are overcome when electric fans are used. Beatty fan units consisted of “the fan, a fully enclosed electric motor, propeller fan type, with two-speed switch and a heavy motor support bracket for attaching the unit to the sable wall. ” Options included, inside fan guard and optional automatic, self-closing shutters for the outside of the fan.

Beatty also markets their fans as “easy to install, complete and ready to bolt in place. The unit uses very little electricity and is easy to operate. Just push the button to start or stop the fan. Better year-around ventilation will be ensured by installing Beatty motor-driven fans.”

So it seems somewhere around the mid-1900’s we were beginning to see the shift and adoption of more technology in barns, now the tech in 1949 was electricity and fans! Amazing to look back and see the jump we have made, and continue to make, as we work towards keeping our animals healthy and productive.

If you want to see how we can set you up with the latest in hog or poultry barn ventilation, please contact us for a free consultation. New Standard Group is a leader in barn ventilation innovation and technology.