It is well-known that weaning is a critical moment in pig production. Young pigs go through significant changes, such as starting a new feeding system and moving to different housing. The stress caused by such changes, coupled with a still immature immune system, increases the susceptibility to pathogens. They can overgrow in the gastrointestinal tract, trigger diseases and compromise feed intake and growth.

In-feed antibiotic growth promoters (AGPs) have been used extensively as the solution for a “healthier” transition through the weaning period. However, rising concerns about the occurrence of antimicrobial resistance have led to the ban of AGPs in multiple countries. In the US, the FDA implemented the Veterinary Feed Directive, which eliminates the use of antibiotics for production purposes (i.e. growth promotion and feed efficiency). Therefore the US pig industry is urgently searching for alternatives to replace AGPs.

Providing newly weaned pigs with antibodies is part of the solution. Functional proteins as porcine plasma, but also egg immunoglobulins (IgY) have been evaluated in this context. The protection coming from antibodies has been shown to be effective in controlling intestinal disorders and supporting nursery performance (Pozzebon da Rosa et al., 2015; Gatnau et al., 1995).

The key advantage of egg powder-based products, in comparison with other sources of immunoglobulins, is that it can be delivered with standardized amounts of antibodies. In plasma, for instance, the content of antibodies depends on the diseases the slaughtered animals were confronted with during their life. Hence the antibodies available in the plasma may be useful for supporting the young pigs, but also may be useless.

Specifically designed egg powder-based products, on the other hand, make use of birds’ natural immune development. Hens produce antibodies against the diseases they are confronted with and transfer them into the eggs. These antibodies are known as IgY (Immunoglobulins from Yolk). Even if the pathogens the hen encounters are not triggering any diseases in chickens, her immune system will recognize them as potentially harmful substances and will develop specific IgY against them. This makes it possible to design products for specific situations, e.g. for pigs at birth or around weaning.

A 42 days long experiment was conducted on a commercial wean-to-finish research facility, under the supervision of Iowa State University personnel (Ruckman and Patience, 2019). 1230 pigs weaned at 15-18 days of age (body weight 10.87lb ± 0.04lb) were allocated to 6 trial groups, arranged as a 2×3 factorial design. In total there were 60 pens with 10 pens per treatment and 20-21 pigs per pen. The trial design is shown in table 1. Diets were formulated to contain the same levels of nutrients, including SID lysine and ratios of other amino acids to lysine. One half of the trial groups received standard in-feed antibiotics (AB+), while the other half only received antibiotics in phase III and not in phases I and II (AB-). Both, the AB+ and AB- group, were subdivided into three groups: one control group, one group receiving spray-dried porcine plasma (SDPP), and one group receiving an egg powder product (EP), respectively. The EP tested was Globimax® JS (EW Nutrition GmbH).

The following parameters were measured (Figure 1):

Data were analyzed using the MIXED procedure of SAS (9.4). 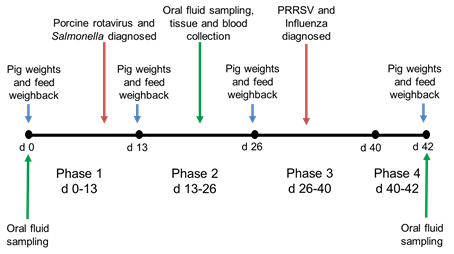 Figure 1: Chronology of the trial (Ruckman and Patience, 2019) 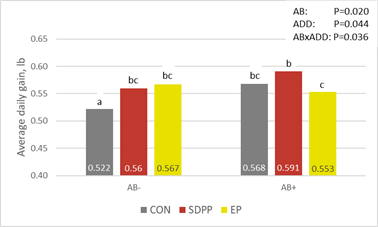 The results for feed intake (figure 3) reflect the results for average daily gain (figure 2). This resulted in a similar gain:feed ratio across all groups (figure 4). 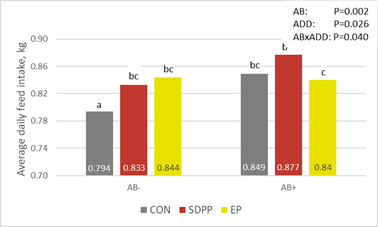 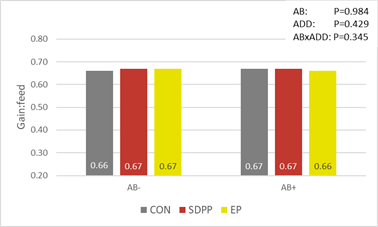 The health evaluation showed that the pigs in this trial were naturally challenged by porcine rotavirus and Salmonella in the second week. In week 4, PRRSV and Influenza A were confirmed.

It was observed that 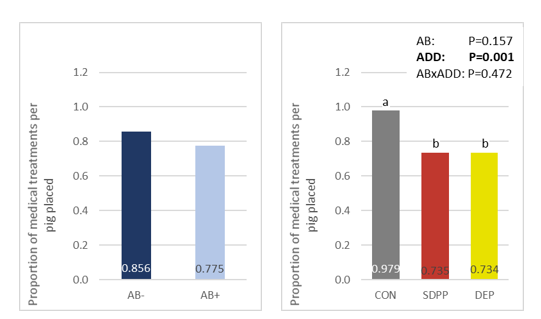 Table 2: Effects of antibiotics and additives on the overall cost of gain

This difference in cost generation stems from plasma requiring a 10 to 20-fold higher inclusion rate than the EP. The IgY content of the egg powder product at the recommended inclusion rate (0.2%) has the same protective effect in the gut as the IgG of the plasma (inclusion rate 4%). When utilizing Globimax® JS, however, the nutritionist can choose protein sources in the market, which are more cost-efficient.

Within the group with no inclusion of antibiotics in phase I and II (AB-), the animals fed the egg powder-based product Globimax® JS or plasma showed a better growth performance than the control group. Among the groups receiving standard levels of antibiotics (AB+) during three phases, the pigs fed spray-dried plasma showed the highest growth performance. Due to the higher feed intake, however, their FCR was similar to that of the other animals within the AB+ group and also to the feed conversion of the AB- groups.

As the animals suffered from different diseases, it could be shown that both SDPP and EP had a positive influence on animal health. The groups receiving functional additives required fewer medical treatments. There was, however, no difference in terms of total removals compared to the control.

The economic evaluation showed that the spray-dried plasma feeding program was the most expensive, while the costs for Globimax® JS were at an intermediate level between those for the control and plasma groups.

In this trial, Globimax® JS proved to be an interesting gut health tool when added to a low antibiotic feeding program.  With high functionality at low inclusion rates, choosing a high-performing egg powder based source of antibodies over plasma is not only more cost-effective but allows pig nutritionists to freely select complementary protein sources. Egg immunoglobulins should, therefore, be the tool of choice to maintain strong weaned pig performance in an era of antibiotic reduction.