As of early 2019, China has reported more than 100 cases of African swine fever (ASF) in 19 provinces and four municipalities, including Beijing, for a total of 23 distinct geographic areas. Recent outbreaks have been reported in Guangdong and Fujian provinces. However, a new case in the north’s Heilongjiang province has affected a farm with 73,000 pigs, the largest farm yet to report a case of the deadly disease.

On Dec. 25, Chinese officials announced the detection of ASF virus in some protein powders made using pork blood manufactured by a Tianjin-based company. The raw materials for the batches were from 12 slaughter and processing plants in Tianjin. The new ASF case occurred despite the farm banning of the use of food waste and pig blood as raw materials in the production of feed for pigs, in a bid to halt the spread of the disease.

In a related move, China recently announced that slaughterhouses will need to run a test for ASF virus on pig products before selling them. Slaughterhouses must slaughter the pigs from different origins separately. They can only sell the products if blood of the same batch of pigs is tested negative for African swine fever virus. If an ASF outbreak is found, slaughterhouses must cull all pigs to be slaughtered and suspend operations for at least 48 hours, according to the regulation, which will go into effect Feb. 1. 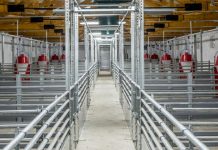