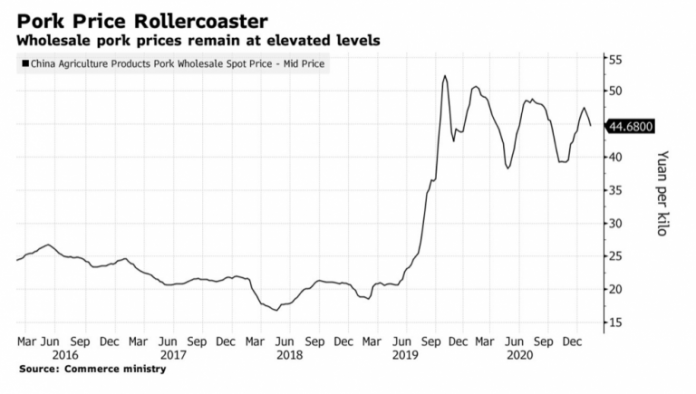 Late last month, Bloomberg News reported that, “China’s farm ministry is touting a complete recovery in pig numbers from the ravages of African swine fever by the middle of the year. Fresh outbreaks of the virus and other lethal pig diseases could pose risks to that outlook.

The Bloomberg article noted that, “Other viruses, such as foot-and-mouth disease and porcine epidemic diarrhea, have also taken their toll in outbreaks exacerbated by a harsher-than-usual winter, said Lin.

‘The recovery of hog herds in some regions could be delayed, particularly in Shandong and parts of Henan and Hebei,’ he said.

Also last month, Reuters News reported that, “New variants of the African swine fever virus circulating in China appear to cause a milder form of the disease, making it less deadly but harder to detect and to bring under control, a study published this week showed.

“The paper by a team at the Harbin Veterinary Research Institute under the Chinese Academy of Sciences is the second this month to report on natural mutations in the virus which ravaged China’s pig herd during 2018 and 2019 and continues to kill pigs in the world’s biggest pork producer.”

With respect to a potential vaccine, Bloomberg News reported recently that, “China is still conducing clinical trials on a vaccine to combat African swine fever, with no timeline on when commercial production can begin, according to a top researcher.”

Meanwhile, Reuters News reported last week that, “An outbreak of African swine fever has been confirmed in piglets being illegally transported through Funing county in China’s southwestern province of Yunnan, the farm ministry said.

The case comes amid growing concern that a severe wave of disease in recent months has hit China’s hog herd, the world’s largest.

Mr. Hirtzer explained that, “China’s hog herd, the biggest in the world, has been rebounding from an ASF outbreak that started in 2018. If the disease starts spreading again, it could boost demand for meat imports and hit shipments of soy and corn needed to feed the pigs.”

The new variant of African Swine Fever that appears to be going through China is less lethal, harder to test for, has a longer incubation and appears just as contagious. Piglet mortality is said to be 10% above normal. Pork imports are rising and feed demand turning soft. #oatt

Mr. Polansek added that, “Traders said they were uncertain about the extent of the risk to the Chinese herd from African swine fever, or ASF, which was first detected in China in August 2018.

“China’s Dalian soybean futures reached a record high on Wednesday, signaling to some traders that demand for animal feed is strong because the herd is recovering.”

Separately, Bloomberg writers Megan Durisin and Alexander Michael Pearson reported on Friday that, “Several key Asian importers are starting to ease restrictions on German pork purchases six months into the country’s African swine fever outbreak, while a deal with leading buyer China has yet to be reached.

“A flurry of countries slapped bans on German meat after the country reported its first case of the deadly hog virus in September. That sent pork prices sinking across the European Union, the world’s top shipper. More than 700 cases in wild pigs in Germany have since been reported, although the outbreak remains confined to the east and no farms are affected.”

The Bloomberg article stated that, “Vietnam, previously Germany’s fifth-largest market, and Singapore will now accept pork exports from areas in the western European country which aren’t affected by the virus, the agriculture ministry said Friday in a statement. South Korea also agreed to resume imports of certain products, as well as South Africa, Brazil and Argentina.”