The U.S. Bureau of Labor Statistics (BLS) released July non-farm payrolls on August 5th and July Consumer Price Index (CPI) on August 10th. Both reports beat market expectations. About 528,000 new jobs were created in July, well above June level. Annualized Inflation was lowered to 8.5% from the record 9.1% in June.

While strong jobs data and taming inflation show the resilience of US economy, worrying signs are emerging. There are strikingly different faces of America: 1) People with jobs and those without; 2) Financially sound public companies and struggling small businesses; 3) Commodity prices that are under control, and those still flying high.

According to the Census Bureau, US population was 332 million in January 2022. Civilian Labor Force data reported by the BLS was 164 million in July, 49% of total population. It appears that the non-farm report shows us only half of the country.

Total number of non-farm employees was 158 million in July. Of the half-million new jobs created, Leisure & Hospitality contributed to 96,000 (18%), while retail, wholesale, transportation, and warehousing together accounted for 42,000 (8%). Service-sector jobs tend to be low-pay, part-time and/or without benefits.

Health care and Government created 70,000 (13%) and 57,000 (11%) new jobs, respectively. Since 2020, the Federal government has spent trillions to fight the pandemic and rescue the economy.  These jobs were funded by budget, not by growing demand of a free market.

Although American consumers continue to support the economy, low-income earners are struggling with rising costs of housing, food, transportation, and household necessity.

Officially, the U.S. had 5.7 million unemployed persons in July. It is very misleading.

According to the July report, “The number of persons not in the labor force who currently want a job was 5.9 million in July. These individuals were not counted as unemployed because they were not actively looking for work during the 4 weeks preceding the survey or were unavailable to take a job.” If we take both into consideration, the total number of unemployed people would be 11.6 million, with real unemployment rate at 6.8%.

Additionally, more than half of the population is not included in the labor force, who count children, housewives, retirees, military members, adult students, and US citizens living abroad among them. People without jobs still have living expenses. They may be supported by working family members, government programs, or charities. They are the most vulnerable when the economy turns south.

Retirees with fixed income are also being hit hard. With rising price, they sometimes must make the hard choice between food, medicine, and filling up the gas tank.

From the pandemic triggered selloff in March 2020, the S&P 500 rebounded and doubled its value to 4800 last December. In 2022, the index was down 24% in the first six months. It has since recovered half the losses, down just 11% year-to-date as of August 10th.

With the ability to produce and distribute their products around the world, Big Businesses could withstand the impact of higher cost or adverse policy better than most companies.

According to WSJ data, as of August 5th, the trailing 12-month Price/Earnings Ratio (P/E) is 22.6 for S&P 500. Forward P/E is 18.2. Market expects S&P component companies to have lower earnings, but the impact of pending recession is not very significant.

Let’s start off by saying that I do not have comprehensive research on private businesses. Since most readers could only invest in the secondary market, we could use the Small-Cap Russell 2000 index as a proxy to mainstream American businesses.

Russell has a YTD return of -12%, about 1% below the S&P. In the past five years, Russell underperformed S&P by 28%. Small-Cap stock performance is especially weak at time of market turmoil.

A big difference is in the P/E ratio.  Russell has a trailing P/E of 68.9, but the forward P/E sharply drops to 22.6. In good times, Small-Cap stock price have been inflated a lot more than the Blue-Chip. I expect their price to deflate faster in the pending recession. 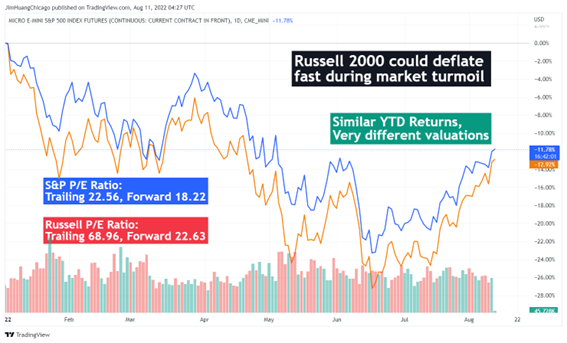 July CPI is unchanged from June month over month (M/M), and up 8.5% year over year (Y/Y). Core CPI, which excludes food and energy, is up 0.3% M/M and +5.9% Y/Y. Diving in the data by commodity category shows a different picture.

Overall, inflation is lower in July only because the sharp decline in energy prices offset the price gains in food, housing, new cars and medicine. Investors’ thrill in the stock market may be gone when they go the supermarkets after work.

There are signs that consumers are downgrading their food purchases in the face of runaway inflation.

Firstly, people tend to give up dining out in favor of cooking at home to save money. In July, food at home inflation was +1.3% M/M and +13% Y/Y. Price inflation for food consumed away from home increased at a slower pace, up 0.7% M/M and 7.6% Y/Y. There is a 5.5% spread, which impacts food spending at these two segments.

Secondly, meat purchases show an apparent shift toward less expensive options. In July, beef price inflated 3.4% Y/Y, while pork was up 7.6% and chicken up 17.6%. Within each meat category, lower cost products also show higher inflation, indicating more demand. For example, ground beef was up 9.7% Y/Y, while steak price was down 1.5%!

With the headwind facing American economy, I think that a recession is inevitable. Based on the above analysis, I recommend shorting the Russell 2000. A 60+ P/E is too rich a valuation. The index could crash harder than S&P during an economic downturn.

Another idea is on beef prices. American consumer generally eats more beef dining out. With the shift to cooking at home and buying cheaper meat, I expect beef prices to fall faster than pork price during a recession. 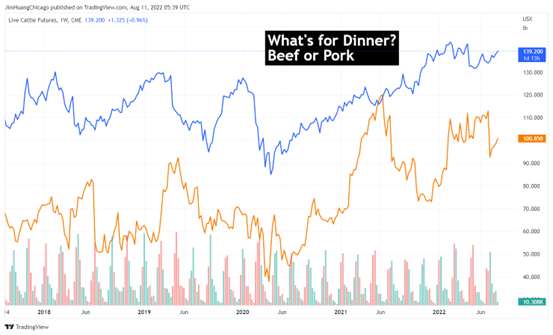 The futures market is extremely volatile this year. Getting an information edge increases your odd of success. I suggest my readers to subscribe to CME market data. Tradingview users already have access to delayed data. A Pro user could upgrade to real-time CME market data for only $4 a month, a huge discount at the time of high inflation.

*Trade ideas cited above are for illustration only, as an integral part of a case study to demonstrate the fundamental concepts in risk management under the market scenarios being discussed. They shall not be construed as investment recommendations or advice. Nor are they used to promote any specific products, or services.