I joined the swine industry on a full-time basis for the first time in 1999. It was an interesting time in the swine industry. The industry had just gone through probably the most difficult year in its history. In the early to mid 1990’s, the industry had experienced a major period of expansion and significant productivity improvements culminating in an oversupply in 1998 that drove prices to extraordinary lows. Just hearing “1998” sends shudders down the spines of pretty much anyone who was around the industry at that time. 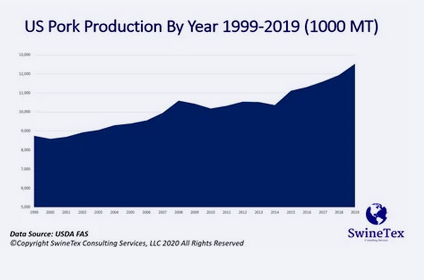 I would argue that around the time I joined the industry, we were beginning a phase of maturation that lasted about twenty years. Between 1999 and now, the industry has been in a phase of improved productivity, growth and consolidation. Let’s discuss each of those characteristics individually.

First, we’ve been steadily increasing productivity levels over the last 20 years. In 1999, the average pork producer in the US produced about 17 Pigs/Mated Female/Year. PigCHAMP data for 2019 shows PMFY had exploded to over 26. Similar increases have been achieved in other metrics such as feed conversion.

Lastly, this increasing productivity, along with tight margins, drove probably the most obvious trend of the last two decades…consolidation. During the last 20 years, farms have gotten larger, pork production companies have gotten larger and many smaller operators have either gone out of business or been purchased by larger operations pursuing aggressive expansion plans. Even large producers have been swallowed up by mega producers. For example, Murphy Family Farms was one of the largest pork production companies in the world when it was acquired by Smithfield Foods in January of 2000. Other notable examples include Smithfield’s 2006 acquisition of Premium Standard Farms and Seaboard Foods’ 2016 purchase of Texas Farms.

The last twenty years have consisted of many interesting developments and challenging obstacles for producers to deal with. Despite the changes and volatility, however, there has been a predictable underlying current that has provided some level of predictability. No matter what happened, we could pretty much count on the trend towards improved efficiency and productivity and the constant drumbeat of consolidation. I believe that is changing and we’re entering a new era for our industry.

The recent announcement that Maxwell Foods was exiting the pork industry was a wake up call for many. This is the first time in modern US pork production that a major player simply closed up shop. Even more startling is the fact that not only was Maxwell Foods large (54,000 sows), they also had a good reputation in the industry as competitive operators. It’s not just Maxwell foods either. According to the 2020 Pork Powerhouse List, 16 of the top 25 pork producers in the US reduced sow inventories in 2020.

COVID-19 has, in many ways, simply accelerated existing trends but it has also triggered some new trends. Disruptions to supply chains, poor profitability and a trend away from globalism are all pushing the industry in a new and very different direction. The changes may be nuanced but will have a profound impact on the industry. Industry participants who understand and embrace these changes, will have significant opportunities. Those who fail to adjust will find there is no longer a place for them in the new era.

We simply can’t consolidate ourselves out of this predicament. We’re just producing too much pork and with relatively static domestic demand and increasing challenges to export demand, we will be entering a phase of contraction. This will require producers to make significant adjustments in short and long term strategies and will require a fresh perspective on metrics and targets. I believe those changes will be far-reaching, but for now, I’d like to focus on two adjustments I think producers will need to be prepared to make in the coming months and years.

First, we will need to shift our focus from maximizing production to optimizing production. For the last 20 years, we’ve been focused on producing the most pork possible with the facilities and resources available to us. In the future, the industry will need to focus on supplying an appropriate number of animals to the market in the most efficient way possible. Instead of building pig flows at the farm level, we will work backwards from packer delivery targets.

This may sound like a small change and in many ways, it is, but it’s also a significant change. Building supply chains to meet limited demand requires an optimization mindset. So, instead of producing 2% more pigs every year and trying to find a way to get them marketed, we will be focused on producing a fixed (or somewhat fixed) number each year. As productivity goes up, we’ll have to make adjustments to keep supply close to the same. Yes, that means contracting the size of our sow systems at a rate of 1-2% a year. This will look different for every producer but for most, this will involve making decisions on reducing herd size by liquidating or reducing lower-performing farms or farms that are economically or logistically disadvantaged.

Another change the industry will have to make is to focus more on revenue enhancement. There are only two ways to improve profitability, expanding revenue and reducing costs. Our industry has been almost exclusively focused on the later and that will have to change. In an environment of fixed demand, finding and supplying premium markets is the only real way to grow a business. The industry will need to be much more creative in identifying those markets and developing strategies to supply them.

Interestingly enough, these two strategies that I’ve described can be complimentary to one another. Oftentimes, access to premium markets requires production processes that result in poorer efficiency. For example, perhaps you’ve identified a market that will pay a premium for highly marbled meat, but you need to make genetic and nutritional changes that will result in 2% lower performance. That can actually kill two birds with one stone by enhancing revenue and lowering performance thereby reducing the need to liquidate farms to keep production at target levels.

I want to be very clear. I am not saying that efficiency no longer matters or that controlling costs is no longer important. I’m simply saying that we can no longer focus exclusively on those areas if we’re to remain competitive in the new normal. We must adjust our thinking to the realities of the market in which we operate. We need to produce less pork in a more economically sustainable way. Producers who adjust their thinking early will have an enormous advantage over those that don’t change until they’re forced to.

FAPRI: Higher Commodity Prices Contribute to a Sharp Increase in 2021 U.S. Net Farm Income, By Keith Good from the University of Illinois

Consumer Demand for Meat is Strong, By Kent Bang from Compeer Financial

How Are Pigs Raised? By Wanda Patsche