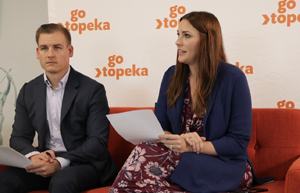 GO Topeka, the economic development group for Kansas’ Capital City, today announced that 10 new startups have graduated from Plug and Play Topeka, an animal health and ag-tech incubator. The early- and mid-stage startups, selected after a pitch competition in late September, have successfully completed the three-month accelerator program.

During the event, each startup had the opportunity to facilitate and foster mentorships and connections through a product pitch to Plug and Play Topeka’s corporate partners. The startups represent a broad range of new innovations including a biometric platform monitored through a wearable patch, a mobile veterinary telemedicine platform, new micro foods to nourish an animal’s gut bacteria and drones to inspect remote infrastructure.

Here is the full list of participating companies:
• Aegis Packaging, headquartered in Singapore – More than a packaging-film manufacturer, Aegis will become a global leader in manufacturing regenerative high-barrier coating for flexible packaging.

• Kenzen, headquartered in Kansas City – Kenzen is a biometric platform monitored through a smart wearable patch that keeps workforces safe from heat, fatigue and overexertion on the job.

• Nanox, headquartered in Massachusetts – Nanox is a natural antimicrobial product line derived from nanotechnology that contains silver as an active ingredient.

“The opportunity to interact with Plug and Play Topeka’s corporate partners has been extremely valuable to our company,” says Keith Miao, chief executive officer and co-founder of Birdstop. “We’re now well on our way to establishing collaborative partnerships with these organizations and our hope is to expand significantly in 2022 and be able to deploy out further in Kansas.”

The Plug and Play Topeka accelerator facilitates and fosters partnerships, mentorships and connections provided by GO Topeka, while capitalizing on Topeka’s robust animal-health and agricultural economic ecosystem. Topeka is centrally located within the “KC Animal-Health Corridor,” the world’s largest concentration of the animal-health related industries.

“It’s been an exciting year of innovation for the capital city,” said Katrin Bridges, senior vice president of innovation at GO Topeka. “The successful completion of the second accelerator program comes shortly after our announcement of the ASTRA Innovation Center, a 60,000-square-foot project that will be utilized for future Plug and Play startup accelerator programs. We can’t wait to watch the success that these investments bring to the community.”

“The intellectual capital and technology generated from our Plug and Play Topeka program amplifies the future of the animal-health industry here,” says Lindsay Lebahn, program manager for Plug and Play Topeka. “It’s exciting to see these startups move forward with their products after utilizing the region’s resources.”

Since the start of the program in spring of 2021, 20 startups have graduated from the Plug and Play Topeka accelerator program. Each year, the program will develop two accelerator groups, each of which are made up of 10 animal health and ag-tech startups.