An Indiana veterinarian has turned over a small portion of his 120-acre corn and soybean farm to Zoetis Inc. for a demonstration of the company’s Improvest castration drug.

Improvest is touted for its effect on “boar taint,” an unpleasant aroma or taste in cooked pork harvested from some mature male pigs.

“Improvest offers pork producers and meat packers a new and more sustainable way to manage the issue of off-odors in pork,” said Gloria Basse, vice president of Zoetis’ U.S. pork business unit. “Because this is so revolutionary, Zoetis is committed to educating people across the entire pork chain to better understand the value that can be gained.”

Improvest is used in dozens of nations worldwide and was introduced into the United States in 2011. The veterinary prescription drug uses a pig’s immune system to temporarily provide the same effect as physical castration but much later in a male pig’s life, Zoetis noted.

Farm tours are available by contacting a representative of Florham Park, N.J.-based Zoetis. 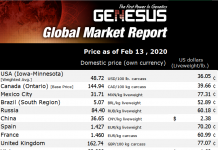