Why there is so much variation across the industry and how early and late weaning ages affect farm production.

Weaning age plays a key role in both setting up sows for maximized productivity as well as preparing young pigs for the nursery, growing and finishing phases. Key objectives when managing lactation length are to provide adequate recovery time for the sow, and ensure that a piglet is old enough to have acquired adequate immunity, can effectively thermoregulate, and has developed a more diverse gut enzyme profile to aid in the transition from a liquid to a solid diet. A pig that is 15 days old will have different requirements than a pig that is 26 days old in terms of environment, temperature, diet composition, and feeding strategy because of those factors.

Any successful weaning program depends on targeting an age and weight that considers the systems production flow and quality of labor, care, nutrition program and management facilities available.

Depending on whether a production system is selling weaned pigs or retaining ownership, the goals of the farm and the ideal weaning age will differ. The average age at weaning in the industry ranges between 19 and 22 days. Most farms use this number because by this age, the piglet has developed a level of active immunity and the energy stores to perform well post weaning, while the sow also has recovered for the subsequent pregnancy.

Some farms have, or continue to practice very early weaning because it can enhance a sow farm’s overall throughput. By reducing the days in lactation, farrowing rooms are turned over sooner, theoretically allowing a farm to produce more litters/sow/year.

Early weaning effect on the sow

During the first two to three weeks post-farrowing, the sow’s uterus undergoes rapid involution, decreasing in length and weight. Current research states that sows that lactate for 16 days or less may not have a chance for their uterus to fully recover after farrowing, making the uterine conditions unfavorable for successful implantation and establishment of the subsequent pregnancy. Additionally, lactation is the most energy taxing phase of a sow’s productive life. Sows allowed additional days in lactation will have more opportunity to regain the body condition they lost in early lactation. This results in shorter intervals from wean to service and increased ovulation rates. There is some preliminary work suggesting that there is no adverse effect on the sows fertility, even at weaning ages of 8 to 14 days of age. However, there is still insufficient data on this theory to be certain.

Early weaning effect on the piglet

Newly weaned pigs have poorly developed digestive systems. On top of being removed from their mothers, being mixed with other piglets, and being introduced to a new physical environment, the change in diet makes the transition much more difficult for them. Enzymes that are within the gut of young pigs are used to digest milk (Lactase) before weaning and the gut needs time to develop proper enzymes (Protease, amylase, maltase, sucrase) to adapt to a solid diet (Figure 1). These enzymes are specialized in digesting solid diets that include starches and fibre. Stress, caused by weaning, mixing, and moving of pigs, further reduces the ability of the digestive tract to utilize solid feed. Several studies have found that the disadvantages of early weaning management practices can include inconsistent growth performance.

Feed consumption and gains aren’t the only things affected. While early weaning does decrease the lactation length, decreasing wean to service interval may have adverse effects on cellular immunity in the piglet. Blecha et al. (1983) have shown that early weaned pigs have suppressed cellular immune responses. While they do have passive immunity from colostrum until about 14 days of age, they do not actually start building their own active immunity until about 21 days of age. This 1 week gap in immunity is naturally covered during lactation, commonly termed lactogenic immunity. Piglet immunity continues after colostrum stores have ran out through ingesting milk from their mothers. This milk contains the necessary protection needed against pathogens while the piglet’s own active immunity builds up. Piglets that are weaned before or during this time frame are exposed to pathogens with little to no immunity.

Early weaning will require skilled and competent farrowing attendants. Substantial training and motivation may be needed. It is also important to consider the facilities you will be weaning piglets into:

– Is the pen suitable for their size?

– Are water drinkers, feeders, and heat sources all at the right height for smaller piglets?

– Are they adjustable so they can accommodate the piglets as they grow?

– Is the feeding program, and its ingredients, suitable for early weaning ages?

Weaning at older ages is common in many production systems as it holds a number of benefits.

Late Weaning Effect on the Piglets

Many studies have shown that the longer a sow nurses a litter, the better her progeny tend to perform. Traits that benefit are ADG, G:F, viability (mortality plus illness), and loin and fat depth. Main et al. (2004) found that increasing weaning age increased overall weaning-to-finish ADG, weight sold per pig weaned, and decreased mortality rate. Longer lactation lengths also allow the sow time to transfer cellular immunity to her litters and allows enough time for the piglets to develop their own active immunity.

So why doesn’t everyone wean at older ages? Well, the longer a sow lactates with one litter, the longer her farrow to farrow interval is, which equals lower litters per sow per year. SMS challenged this theory in a recent article, questioning whether or not litters per year is the measurement that should drive the farm. If older piglets have better immunity, survivability, and are heavier at weaning, you may be weaning just as many pigs that are viable going into the nursery and then perform better at finishing.

Late Weaning Effect on the Sow

Getting a good farrowing rate and increased litter sizes is correlated with shorter wean to 1st service interval. The time between weaning and the sow’s first cycle is dependent on many factors, one of them being pigs’ age at weaning. The sooner a weaned female returns to heat, the more fertile she is and the more eggs she will shed, thus improving litter size. As weaning age increases, days to cycle should decline. This occurs because the hormone levels triggering estrus decline as the lactation length increases.

Industry benchmarking systems find that there is considerably less variation in the farms that are over 30 PW/MF/Y regardless of wean age. This suggests that weaning age shouldn’t be completely dependent on how many litters a sow can produce per year. Rather the focus should be on raising a solid number of quality piglets that will not only make it to weaning, but also perform inthe nursery and finishing periods.

With our genetics, we find that both the sow and piglets perform best when weaning age is between 19 and 22 days. This allows the sow’s reproductive tract enough time to recover for a successful pregnancy and short wean to service interval. It also takes advantage of increased TB, ADG, G:F, and pre-wean mortality performance measures in weaned piglets.

As stated above, any successful program, regardless of genetics, requires that it is tailored to your farm’s environment, nutrition program, and management style. 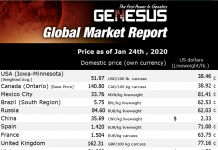