VIDO-InterVac hopes to be ready to begin testing new approaches for dealing with African Swine Fever on animals next year. In 2013 the Vaccine and Infectious Disease Organization-International Vaccine Centre was cleared to work with level 3 pathogens and, in the fall of 2019, it received clearance to work with African Swine Fever. Dr. Volker Gerdts, the Director and CEO of VIDO-InterVac, says VIDO is working with level three diseases, both human and animal, referred to in the animal sector as level three ag.

Clip-Dr. Volker Gerdts-VIDO-InterVac:
They’re the most significant diseases like African Swine Fever, Classical Swine Fever and so on. The addition to this is that many of these diseases are also foreign to Canada or to North America and therefore are considered foreign animal diseases and so the restriction is that work with foreign animal diseases is only permitted in government labs. The significance, I think, is recognition that VIDO has one of the most advanced high containment facilities in the world right here in Saskatoon. It’s a 150 million dollar facility that was initially funded by the federal government of Canada and the province of Saskatchewan and the city of Saskatoon. It’s specifically designed to work with level three pathogens. What that means is everything is built to prevent any pathogens from ever getting out of this facility. This includes all fluids, all solid, all animal materials. Everything is completely destroyed to ensure that no pathogen will ever get out.

Dr. Gerdts says VIDO has the joined the small number of labs world wide that are working with African Swine Fever.
He notes the initial work involves cell culture in the lab and the goal is, as quickly as possible, to test new drugs on pigs and also to work on developing vaccines. 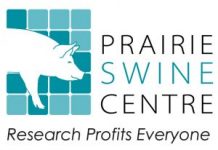