U.S. live cattle futures fell on Wednesday, as cattle continue to back up, despite slaughter plants’ coming back online, traders said.

Feeder cattle contracts were weaker, with the August contract slipping 2.925 cents to 129 cents per lb.

The most-active July hogs contract has fallen for six sessions in a row and nine of the last 10.

The U.S. Agriculture Department said on Wednesday that the daily hog slaughter was 397,000, matching Tuesday as the highest total since April 17. The daily cattle slaughter totaled 101,000, the highest since April 8.

“We’re still backing cattle up. While the slaughter is improving, we’re not there yet. Not even close,” said Dennis Smith, livestock analyst at Archer Financial.

Slaughter numbers remain well below pre-coronavirus pandemic averages, as coronavirus outbreaks at slaughter facilities have led to plant closures, backing up hogs and cattle at the farm level.

President Donald Trump said on Tuesday the United States should consider terminating trade deals under which it imports cattle as the federal government moves to help agricultural producers hard hit by the coronavirus outbreak. 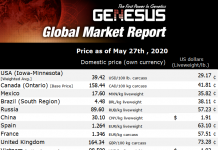