“The impact of Iowa’s agriculture industry is tremendous, and it continues to grow,” Northey said.  “The growth over the last five years is a testament to the hard work, creativity and persistence of our farmers.  Even with the recent softening of commodity prices, Iowa agriculture is well positioned to continue to be a key driver of the state’s economy.”

Iowa moved from 3rd nationally in each category in to 2nd place national, passing Texas in the total value of production, passing Illinois in the value of crops sold and passing California in the value of livestock sold.

Additional preliminary Census of Agriculture date can be found at www.AgCensus.usda.gov.  The final census results will be released in May and will include U.S., state and county data on livestock inventory, crop acreage and production, energy, land use practices, and production expenses.

New Economic Study: African Swine Fever Outbreak in the US Could Cost $50 Billion 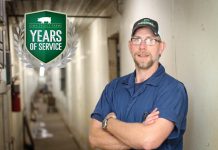