New research that investigates the genetic ability for pigs to respond to disease challenges in a natural
environment is underway thanks to the collaboration of Hypor, PigGen Canada, and a team of
researchers from the Universities of Alberta, Guelph, Saskatchewan, Iowa State and the Centre de
Dévelopement du Porc du Québec (CDPQ)

“This is a unique approach in that it exposes pigs to multiple pathogens simultaneously,” says
Hypor Senior Geneticist, Dr. Patrick Charagu. He explains that this research model is more informative
than research that tests the genetic response to only one or two pathogens.
“Pigs may respond differently to each pathogen,” he says. “We want to see how they respond to
exposure to a variety of types of diseases.”

Unlike other research programs that challenge pigs with specific diseases via inoculation, the
current research project exposes pigs to several pathogens in a natural environment, such as through
pig-to-pig contact, the manure, general airborne exposure.
The goal for the three-year program is to try to understand if there is underlying genetic  explanation to how pigs respond to disease challenges. Approximately 3,500 Large White by Landrace
cross (F1) barrows are health challenged and followed from wean to finish. Information and data, such
as morbidity, mortality, growth and feed conversion, are collected from each of the pigs. Upon slaughter
carcass data is also recorded.
Each of the seven genetic companies that are members of PigGen Canada are supplying their
pigs for the collaborative research project.
Right at the beginning, prior to entering the research facility, pigs are tested for their innate
ability to respond to a pathogen challenge (immune response). This information is then later compared
to each pig’s reaction to actual disease exposure once it enters the research facility.
The idea is that the research will help to identify, and if possible quantify, a pig’s ability to withstand a
disease challenge — a pig’s ability to maintain a high level of performance under disease exposure. This
is referred to as disease resilience or tolerance.
“Ideally, this will help us to breed pigs that will be able to keep on performing optimally (eg feed
conversion and reproduction) even if they are on a disease-challenged farm,” Dr. Charagu says. “This
would lower health costs and improve performance, and hence profitability, for the pork producer.”

At the end of the day pork producers want pigs on their farm that are going to make them a
profit. And Hypor’s aim is to breed pigs that are profitable for the pork producer.
This research fits right in place with Hypor’s goal as a genetics company. Hypor’s, and indeed
Hendrix Genetics’, ambition is to breed animals that are good at withstanding all challenges while
performing at a high level. 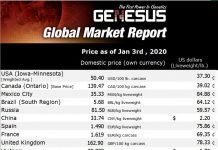