Feeding low protein diets to pigs results in increased net energy in the diet, reduced water intake by pigs, and reduced nitrogen excretion. This will result in reduced volume of manure and also reduced concentrations of ammonium in manure. However, if formulation of low protein diets results in feeding diets with concentrations of indispensable AA that are below the requirements, deposition of protein in pigs may be greater and deposition of fat may be increased compared with pigs fed a diet containing higher level of protein. However, it is not known if feeding a diet low in protein to weanling pigs also results in changes in carcass characteristics of market pigs.

Therefore, the objective of this experiment was to test the hypothesis that feeding a low-protein diet to pigs during the post-weaning period will result in reduced diarrhea during this period, but no effects on growth performance from wean to finish and no changes in carcass composition of pigs when they reach market weight.

One hundred and sixty barrows and gilts (21 d old; BW = 6.29 kg) were allotted to 4 dietary treatments and there were 32 pens with 5 pigs per pen in a randomized complete block design. Four diets were fed to the 160 pigs; thus, there was a total of 8 replicate pens for each treatment. Experimental diets were based on a 6-phase feeding program. In Phase 1, four dietary treatments included the positive control (PC) diet containing 23% CP with an antibiotic growth promoter (Mecadox®10; Phibro, Teaneck, NJ), the negative control (NC) diet containing 23% CP without an antibiotic growth promoter, and 2 low-protein diets containing 19% CP (NC+LP1) or 17% CP (NC+LP2), respectively, without antibiotic growth promoter. The diets containing 23 and 19% CP met requirements for all indispensable AA, but in the diet containing 17% CP, indispensable AA were supplied to meet only 80% of the requirement.

Hot carcass weight, fat thickness, loin eye area, dressing, and lean percentage also did not differ among pigs fed the 4 diets during Phases 1 and 2 (data not shown). This observation confirm that under-supplying AA during the early post-weaning period will not result in long term negative effects on protein synthesis and muscle deposition.

During Phase 1, diarrhea score was greater (P < 0.05) in pigs fed the NC diet compared with NC+LP2, but there was no difference among pigs fed PC, NC+LP1, or NC+LP2 diets (Table 2). During Phase 2, the diarrhea score was less (P < 0.05) in pigs fed PC diet compared with NC or NC+LP1 diets. However, the diarrhea score did not differ between pigs fed PC and NC+NP2 diets. A similar tendency was found for the frequency of diarrhea being less for the low protein diets (data not shown). These observations demonstrate that the reduction in diarrhea score that is usually observed when an antibiotic growth promoter is used can be achieved by reducing dietary crude protein concentration. Even if this means that pigs need to be under supplied with amino acids during the initial 2 weeks post weaning that will not affect overall growth performance from wean to finish.

Feeding low-CP diets during the initial 4 weeks post-weaning does not affect overall wean to finish growth performance or carcass quality of pigs, when they go to market. 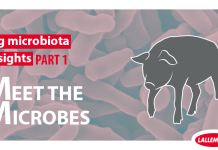