Despite improvement in China’s containment of African swine fever, it still takes time to restore pork output from hog stocks, the ministry told local governments in a video conference, adding that frequent transportation of piglets and breeding sows has raised the risk of resurgence of the disease.

The ministry also asked local governments to conduct strict investigations into the transportation of animals and crackdown on irregularities, such as the sale of pigs that have died from the disease.

“(Each region) should speed up their under-construction projects … and replenish stocks in small-to-medium size farms,” the ministry added.

China has reported several new cases of the disease this month, mostly from transportation of animals across provinces.

The agriculture ministry has launched a 60-day investigation into illegal transportation of hogs, starting Apr 1, it said in another statement. 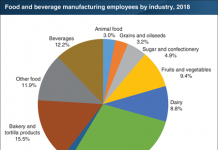 USDA: Meat Plants Employ Close To A Third Of The Food And Beverage Manufacturing Employees