Modern animal breeding is a combination of art and science, aimed at improving the next generation of
animals. By selecting the best animals, both in genetic value and physical appearance, to become
parents of the next generation, on average this next generation will be better, more efficient, more
fertile than their parents. A relatively new tool in the animal breeder´s toolbox to estimate the genetic
value of an individual is genomic selection. Genomic selection has caused a revolution in the field of
genetics, especially in animal breeding. Genomics results in more accurate breeding values at a much
younger age, which enables a more accurate selection for those traits that are measured later in life
(e.g. total born) or traits that are difficult to measure on breeding candidates (e.g. carcass or meat
quality).
Genomic selection allows for a better selection between full sibs, i.e. full brothers or sisters,
based on conventional methods these animals would have the same genetic value. All of them receive
half of their genes from their father and half of their genes from their mother. Genomic selection tells us
exactly which half was received from both parents. This allows for a more accurate estimate of an
animal’s genetic value, because we now know which genes have been received from the parents.
At Hypor, genomic selection is implemented for all the breeding lines since a couple of years.
For all the lines we use DNA information to get a better estimate of the genetic relationship between
individual animals. These more accurate genetic relationships in combination with a multitrait genetic
evaluation enables Hypor to make the most use of all available information. The amount of DNA
information is ever increasing, as each month candidates from the different breeding lines are being
genotyped. The enormous increase in data for each line, but also for each individual, allows for
accelerated genetic progress in all traits. 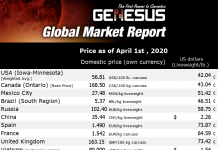