Guymon’s Seaboard hog slaughtering plant is getting a $100 million expansion, thanks to a recent decision by the Guymon City Council to approve a second Tax Increment Finance district for the operation. It’ll result in increased energy needs, both for the plant and for the transportation of millions of animals to the operation.

The expansion will mean another 200 workers at the plant where 1,500 were initially hired 25 years ago with the city’s creation of its first TIF. Since then, the plant increased its capability of processing 6 million hogs a year. 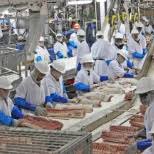 The first phase of construction will include the addition of six new cooler bays, a new engine room and a purging of the primary ammonia system.

Phase two construction will include a new freezer with the capacity to store 6 million pounds of meat and an expansion of the plant’s stockyards. Phase three will be construction of a new SNAP Chill to replace existing bays.

Under the terms of the Seaboard Project Plan, the Guymon Public School will receive an annual payment of $220,000 from annual increment revenues generated within the TIF district.

In addition, renovations to the city’s wastewater treatment facility and lagoons that serve the project will be funded by tax increment notes issued by Seaboard to cover the cost of such improvements, aggregate of $3,000,000, should the City be unable to obtain alternate financing or unable to secure federal grant awards.

An economic study of the project found the added number of workers and construction cost will result in $6.5 million in annual income, $11.2 million value to the local economy and $38.5 million in increased economic output covering several industries.

Time to Prioritize Your People Assets